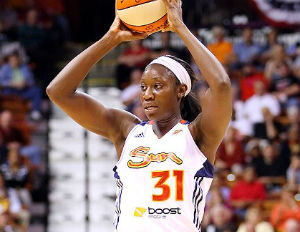 When a basketball player achieves his dream of getting drafted into the NBA, all kinds of “family” show up with their hand out asking to either borrow money or to coerce their new multi-millionaire (or multi-hundred thousandaire) cousin to invest in their business idea.

But when a young woman gets drafted into the WNBA, there is a possibility that family will start showing up to help her out with her finances instead.

Want a snapshot of the salary disparity? Gilbert Arenas, a washed up NBA player who hasn’t come close to playing even half a season since 2007 and isn’t even on a team roster this year, will still earn (for lack of a better word) $45 million over the next two years because of a guaranteed $111 million contract he signed in 2008.

The most that Tina Charles, the reigning WNBA MVP who hasn’t missed a game since she was drafted in 2010, can earn is the league maximum: $105,000 per year. That’s just barely over six figures.

The average salary of a WNBA player for the 2012 season was $72,000 while the league minimum rests just above $35,000 for rookies. Players with three or more years experience earn at least $51,000. $72,000 is still a decent check to people earning thousands lesser. But let’s consider who is making more than these professional athletes:

– The news reporter who probably isn’t bothering to re-cap their games.

– A human resources director who is most likely looking to hire somebody, who will also make more money than them.

– The guy fixing the elevator in their hotel.

– Your cousin with the “good job” downtown.

If you think that sounds strange, consider that in year’s prior, the median salary was as low as $46,000. Meaning that ten years ago, your child’s teacher was probably bringing home a bigger check. However, just like the NBA, it does pay to be the best at what you do, albeit not as much.

On any piece of paper, comparing the 16-year old WNBA to the 66-year old NBA is going to look unfair. The salary cap for a WNBA team doesn’t even reach the $1 million mark. It sits at $878,000. The NBA’s is $58 million. On top of that, you don’t have to be a genius to see that not as many people are buying tickets to WNBA games or buying as much merchandise. Many WNBA teams struggle to break even. Fortunately for them, their losses are subsidized by the NBA. But in an effort to improve their finances, the WNBA has gone the way of professional soccer and NASCAR, allowing corporations to buy ad space on player’s jerseys and uniforms.

Six of the league’s 12 teams have brokered their own sponsorship deals with companies ranging from Finish Line to Farmers Insurance. In 2011, a league wide sponsorship deal worth eight figures was reached with Boost Mobile where the company logo will appear on the jerseys and courts of 10 teams.

In 2011, some NBA players found themselves having to leave the country to find work during the NBA Lockout. While that was a temporary situation for them, it’s an every year reality for even the most popular, highest-paid WNBA player. Players like Candace Parker, Tamika Catchings and Diana Taurasi, all of which whose jerseys are top 10 sellers, still play overseas in the offseason to keep money coming in. In fact, some actually make more over there than they do in the WNBA. A top player can earn over $500,000 playing for seven months. But this also means that they are playing basketball year round, with no breaks.

As the league and its profile continues to grow, there should be more money making opportunities. Players like 2011 Rookie of the Year Maya Moore, became the first ever female basketball player to receive a Brand Jordan endorsement deal, placing her in the same company as NBA superstars Carmelo Anthony and Chris Paul. Players like Lisa Leslie and Cheryl Swoopes before her enjoyed endorsements and signature sneakers with Nike.

While WNBA players may never achieve salaries that will make their male counterparts jealous, they may someday reach a level where there salary exceeds anything you can find on Monster.com.