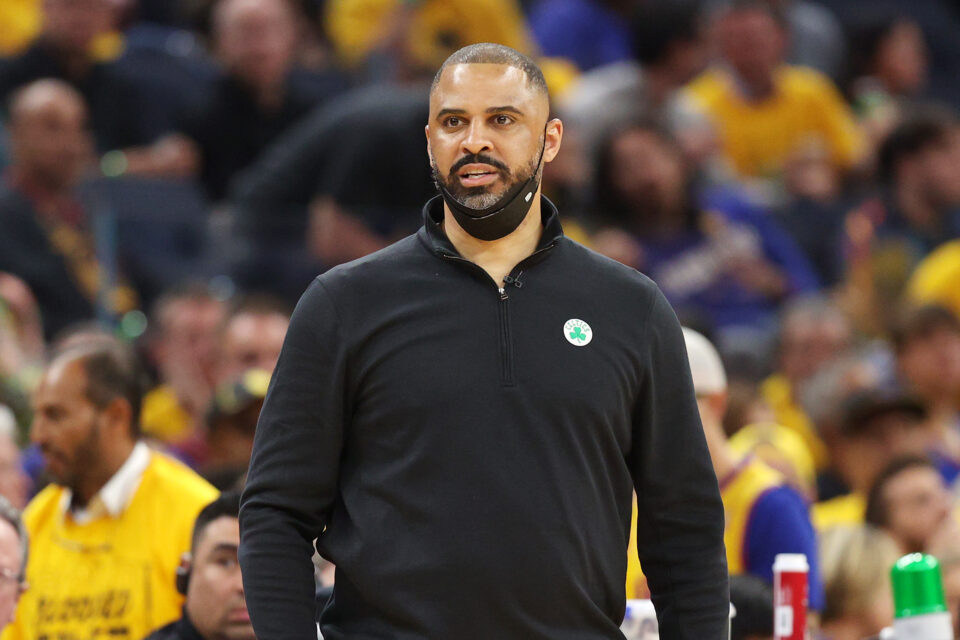 SAN FRANCISCO, CALIFORNIA - JUNE 02: Head coach Ime Udoka of the Boston Celtics looks on during the second quarter against the Golden State Warriors in Game One of the 2022 NBA Finals at Chase Center on June 02, 2022 in San Francisco, California. NOTE TO USER: User expressly acknowledges and agrees that, by downloading and/or using this photograph, User is consenting to the terms and conditions of the Getty Images License Agreement. (Photo by Ezra Shaw/Getty Images)

The woman having an affair with suspended Boston Celtics’ head coach Ime Udoka was allegedly a travel planner for the team who handled his fiancée’s travel and move to Boston, according to TMZ. Udoka is engaged to actress Nia Long and was suspended as the head coach of the team last week due to his “violations of team policies.”

According to the outlet, the team policy that Udoka violated was having a sexual relationship with a staffer of the franchise, a travel planner for the team who was in charge of booking Long’s travel to Boston and road games. The travel planner also helped to coordinate Long’s move to the city around two weeks ago.

President of the Boston Celtics, Brad Stevens, became emotional during a press conference while discussing the cheating scandal and said the affair was upsetting to many of the franchise’s female staff who were dragged after social media speculation about the woman’s identity targeted them. The woman’s name has not been made public so far.

“We have a lot of talented women in our organization, and I thought yesterday was really hard on them,” said Stevens. “Nobody can control Twitter speculation, rampant bulls—t, but I do think that we as an organization have a responsibility that we’re there to support them now because a lot of people were dragged unfairly because of that.”

The affair reportedly came to light when the woman’s husband overheard a conversation on the couple’s doorbell camera. Udoka was suspended for the entire 2022-2023 season and released a statement apologizing to his family and the Boston Celtics.

“I want to apologize to our players, fans, the entire Celtics organization, and my family for letting them down,” wrote Udoka. “I am sorry for putting the team in this difficult situation, and I accept the team’s decision. Out of respect for everyone involved, I will have no further comment.”