Woman Says KFC Franchise Owner Fired Her for Being Homeless 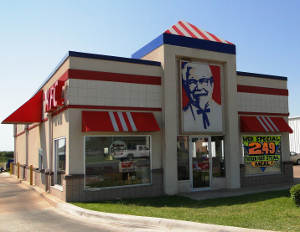 A Mississippi woman hired earlier this month by a KFC says she was fired when the franchise owner discovered she’s homeless, according to the Clarion Ledger.

Eunice Jasica says she has a document signed by a general manager showing she was hired to perform “prep workâ€ and would receive a paycheck every two weeks. But according to Jasica, franchise owner Chesley Ruff withdrew the job when he found out she lived at the Salvation Army.

Ruff said he’d only used her lack of a permanent residence as a cover for the real reason for her termination: her lack of prior food prep experience and her inability to lift heavy boxes in the kitchen, as was required by the job.

“I was trying to spare her feelings, I guess,â€ Ruff said. “I don’t know if that’s right or wrong, but I know it was stupid.â€

Mississippi, where the incident occurred, is an at-will employment state and under law Ruff had the right to terminate Jasica’s employment based on her lack of a permanent residence, but not because of her age.

Rick Maynard, a spokesman for KFC Corp, said KFC operates more than 5,200 restaurants nationwide and follows all applicable employment laws, but its independent franchisees make their own hiring decisions.

Update: Franchise owner Chesley RuffÂ saysÂ “I was under the impression she was in the office for an interview, but with the number of applications we have, hiring her isn’t suitable to our needs right now. She’s free to come back in 30 days.â€

As for the signed letter, Ruff said he did not personally write it, and that it was drawn up in haste to satisfy Salvation Army requirements that prove lodge residents are actively looking for work. He did mention that transportation had occasionally been an issue with homeless employees in the past.

He adds he has hired Salvation Army lodge residents before on multiple occasions, and said he has even used money out of his own pocket to equip them with non-slip shoes and other items.Â “We judge a person on their merits, not where they’re from. Our policy hasn’t changed towards homeless applicants,â€ he said.