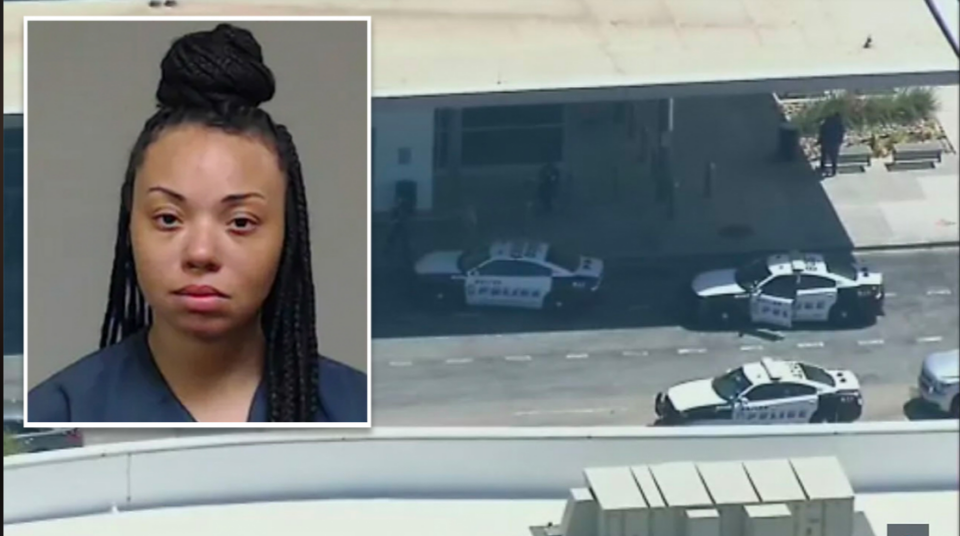 The woman who opened fire at a terminal at Dallas Love Field Airport is a reported former bank robbery suspect, according to the Independent.

Dallas Police Chief Eddie Garcia said at a news conference that Portia Odufuwa, 37, was dropped off near the Southwest Airlines ticket counter on Monday morning. Then the suspect went into a bathroom stall, changed her outfit, and returned the Independent reports.

“Odufuwa went inside a women’s restroom and a short time later comes out into the ticket counter area and fires a weapon several times,” police said, Fox News reports.

A Dallas police officer shot her “in the lower extremities” after she began shooting, according to the Police Chief, The New York Times reports.

Odufuwa was transported to a nearby hospital by authorities, and fortunately, no one else was injured, Fox News reports.

“At this point we don’t know where exactly this individual was aiming,” Dallas Police Chief Garcia said to reporters.

An eyewitness said to FOX 4 Dallas-Fort Worth she saw the woman dressed in black marching to the terminal “with guns up.”

“We were at the counter checking in, and I was trying to check in and we heard someone yelling,” Judy Rawle told the news station. “And we looked up, and we saw her walking down with guns up.”

Rawle remembers hearing the suspect being upset “because her husband had got fired from somewhere,” according to Fox News.

We are now outside in between the building and the tarmac and we’re just told there was a shooter and we are going to need to stay outside for a bit pic.twitter.com/YgmjCAThSj

Travelers ran into shops and restaurants close by, hiding in kitchens and behind furniture. On a business trip, Joe Castronovo III, who flew from Orlando, Florida, recalls stepping into a terminal and “saw people running” as travelers ran for cover, The New York Times reports.

Castronovo’s father, Joe Castronovo Jr., was waiting at the terminal to pick up his son when the terrifying event occurred.

“I pulled up and saw a woman screaming and running away from the building,” the older Mr. Castronovo said. “We got scared something was wrong. Workers were coming out and telling people to hide.”

TSA sent out a tweet encouraging passengers to vacate the premises and that they would have to be rescreened, “Be patient & know that safety of travelers & staff is key,” the Independent reports.