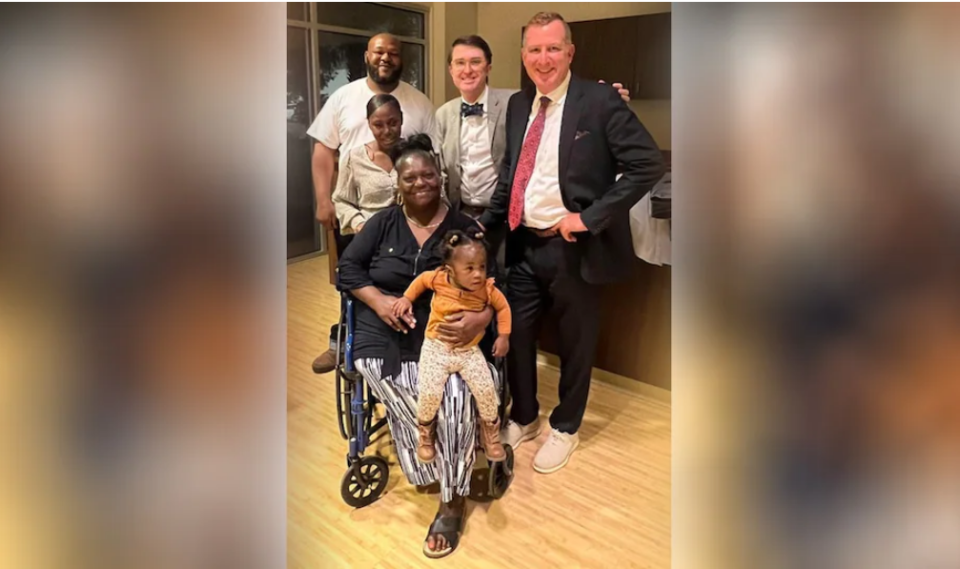 April Jones has been in a wheelchair for six years after getting an infection from a rusty nail in her foot at a South Carolina Walmart. (Photo courtesy of Anastopoulo Law Firm)

A woman from South Carolina has won a $10 million lawsuit against Walmart after having her leg amputated when she stepped on a rusty nail in one of their stores.

According to KATV, in June 2015,  April Jones went shopping at  Florence, SC, Walmart when she stepped on a rusty nail that pierced her foot. The lawsuit stated that Jones “passed through an area where several pallets were nearby when she suddenly felt a sharp pain in her foot. Ms. Jones inspected her foot and observed that a rusty nail had pierced through her shoe and was lodged into her foot.”

The station added that Jones visited the hospital and had to have a hole cut in her foot to treat the wound. This treatment eventually led to multiple surgical amputations, resulting in her losing her right leg up to just above her knee.

Anastopoulo Law Firm, which represented Jones, said she has been in a wheelchair for six years. The $10 million verdict will allow her to buy a prosthetic and make her home more readily accessible.

Jones filed her lawsuit in May 2017. After hearing the case over five days, the jury deliberated for about an hour and a half.

“The weakness of Walmart’s case, among other things, was their failure to produce a video that they claim showed their conforming behavior to a company policy calling for employees to perform regular safety sweeps,” a news release from the Anastopoulo said. “No such evidence was presented for the duration of the five-day-long trial.”

According to The Hill, attorneys for Walmart have filed a motion requesting a new trial.

This is the second lawsuit Walmart has lost this week. On Tuesday, in Alabama, a jury awarded $2.1 million in damages to a woman arrested on a false charge of shoplifting and then billed more than $200 from a law firm as a settlement fee, which was more than the cost of the items allegedly stolen.