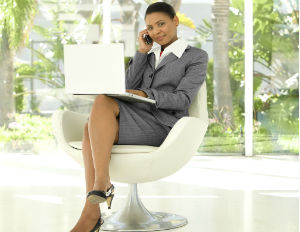 Here is something you may be surprised to know (though you shouldn’t be as black girls are undoubtedly pure magic)—African American women are the fastest growing entrepreneur demographic in the United States. The unfortunate reality, however, is that though black women are rapidly becoming entrepreneurs, we are still disproportionately underfunded when in the start-up stages of our business.

[Related: Why Women Need To Behave Like A Girl To Grow Their Businesses]

According to a report released byÂ Digital Undivided‘s #ProjectDiane, of 88 tech companies led by black women only 11 had raised $1 million or more. The remaining 77 raised an average of just $36,000 compared to the average of $1.3 million raised for all startups–led by mostly white, male founders–who haveÂ historically received over 97% of all venture capital funding.

The study also reports that black women founders have similar backgrounds as most startup founders—well-educated and well-equipped as leaders to run high-growth businesses. Most hailed from Ivy League schools, five graduated from top accelerators like 500 Startups and Techstars, and yet, it seems the dilemma of unconscious bias is still a pervasive barrier to receiving adequate funding and the mentorship necessary to get access to funding.

Something, clearly, has got to give. The bright side to those gloomy report details is that help has arrived. African American sisterhoods of angel investors and venture capitalists have emerged to close the gap by writing checks and launching ventures founded by other black women. You are invited to meet and connect with some of the key players in investing at the 2016 Black Enterprise Entrepreneurs Summit, May 4-7, at the Loews Hotel Miami, Miami, FL. Â Here, Founder and CEO of Blendoor, Stephanie Lampkin, along with angel investor, Simone Castillo and U.S. Director Business Development, Dentons, Lorine Pendleton will chat with Black Enterprise Senior Editor of Small Business, Carolyn Brown on how sisters are building lucrative businesses by and for one another.

REGISTER NOW to learn more about protecting and profiting from your idea at the 2016 BE Entrepreneurs Summit, May 4-7, Loews Hotel Miami, Miami, Florida.

Be sure to follow Black Enterprise on social media @BlackEnterprise for Entrepreneur Summit news, highlights, and updates. Use hashtag #BESummit to stay in the loop. Please be on the lookout at BlackEnterprise.com as speakers, activities, and sessions are announced.