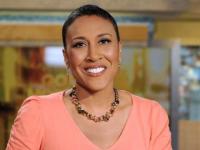 It was late morning when I overheard the hardworking Black Enterprise Events staff say that Robin Roberts (Source ABC)‘ flight was delayed. The original plan was for the Good Morning America co-anchor to tape her show Thursday, hop on a plane,lo land in Orlando, zip over to the Women of Power Summit, receive the first annual Champion Award (for her excellence in journalism as well as perseverance in beating breast cancer), give a talk on Fear Fighting: Are We Afraid of Success and fly immediately back to New York without missing a beat. Well, things never quite happen as we’d like. So lunch began as scheduled, the afternoon workshops were pushed back to accommodate the delay, and the Black Enterprise events staff kept their fingers crossed that Roberts would make it eventually. She did.

When Roberts walked into the beautifully decorated ballroom, an abundance of energy was added to the already powerful presence that all of had contributed since descending on the Ritz-Carlton-Grand Lakes in Orlando. A tall, lean Roberts sporting a gorgeous short haircut looked neither rushed or stressed, but rather ready and eager to share in our moment. “Proximity is Power,â€ she couldn’t wait to say to us once she took the stage.

So with no script, index cards, or teleprompter (but with a lot of love and humor), Roberts not only shared in our moment but allowed us to be a part of the ones that helped her get to not only where she is but also who she is today.

She started by sharing the three D’s her parents instilled in her which she attributes to everything that she is today include: Discipline; Determination and Da Lord. She poignantly added, “God’s delays are not his denials.â€ Such a spiritually grounded mantra goes hand-in-hand with not allowing situations or other to stifle your growth. And when there are roadblocks, it doesn’t mean you’ll never get there, it just means you may have to find an alternate route or wait until the path is clear in order to continue your journey forward.

Many of us are guilty of questioning with resentment (and sometimes anger) when things go wrong (or just not to how we envisioned they would); however it’s during those moments that we discover a little bit more about who we really are. “It’s so important to know yourself and know what’s going to make you happy,â€ says Roberts, who — in spite of criticism — followed her passion and began her career in television with a part time job as a sports reporter over a full time one in news. Later on she would flip-flop her passion with her interests, placing news journalism at the forefront of her career, a transition Roberts admits could be awkward for anyone of us who thinks they were done in figuring it all out. But guess again. Things change, interests change, we change.

Roberts shared many pearls of wisdom, including: “Dream big but focus small.â€ The