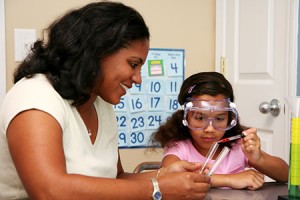 How do we bring more young women into the field of STEM and keep them there was the main issue addressed in the Women of Power session “Educating Our Daughters: Preparing Female Students to Become 21st Century Leaders.” On the panel were Kimberly Bryant, founder and executive director of Black Girls Code; Beverly Daniel Tatum, president of Spelman College; Sandra Finley, president and CEO of the League of Black Women; and Ella Edmondson Bell, founder and president of ASCENT. The moderator was Suzanne Walsh, deputy director, post secondary success, Bill & Melinda Gates Foundation, which hosted the symposium.

A disheartening fact is that African American women make up just 2% of engineers.Â  Yet, there are a number of career opportunities that young women need to take advantage of in male dominated fields. The panel of business and thought leaders noted that STEM (science, technology, engineering, math) education is not just about producing science geeks. Just look at the CEO roster of corporate America. Meaning, a significant number of C-Suite executives at major corporations studied STEM. One example cited was Rosalind Brewer, CEO of Sams Club, who was a STEM student and became the first woman and the first African American to hold a chief executive position at one of Wal-Mart Stores Inc.’s business units. Â She earned a bachelor’s degree in chemistry from Spelman.

Roughly one-third of students of color express an interest in STEM and then they are discouraged, says Tatum, they must be where they can be successful. “Why is there so much success at Spelman College with STEM? It is because of sisterhood and built in support.â€

Mothers have to be more courageous about encouraging their daughters to step in STEM paths even if they may not know the way, says Finley.

“We have to get little girls excited about taking things apart and putting them back together again,â€ says Edmondson Bell. “We buy the toys that little girls play with.â€

Both Finley and Edmondson Bell agreed on switching up toys: Don’t buy Barbie dolls buy Lego building blocks for your daughters. Also, they noted it is crucial to expose girls to science camps and museums.

Encouragement and congratulations from family, friends, and teachers goes a long way but at the same time it is important for young women to learn how to be motivated by both negative and positive commentators, says Bryant. “Let your haters be your motivators.â€ Bryant adds that “self-confidence in our girls is key to their success and not feeling intimidated when they are the only black girl in the room.”

The panelists stressed the need for professional women to help by serving as mentors and sponsors letting the next generation of young women know, “I have your back.â€