The Women of Power Summit: An Experience Like No Other 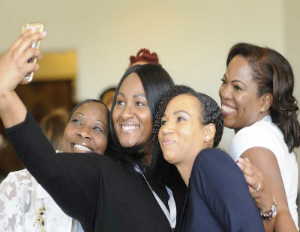 %CODE1%
Each year, hundreds of women around the country attend Black Enterprise’s annual Women of Power Summit and leave feeling inspired and empowered. The 2017 conference was held in February in Arizona and provided over 900 professionals with tools, resources, and information to help them elevate their finances, careers, and businesses. The theme was “Leveraging the Power of Sisterhood” and it was packed with informative seminars, networking mixers, workout classes, a fashion show, and a riveting gospel concert. The conference kicked off with a crowning gala that honored Phylicia Rashad, Pastor Shirley Caesar, and Ursula Burns. Marcia Ann Gillespie was honored with the Barbara Graves Legacy Award.

Following the summit, attendees opened up about the highlighting moments from professional leadership conference. Watch a few testimonials below.

The next Women of Power Summit will be held March 7–10, 2018, at the Disney Yacht & Beach Club Resorts in Orlando, Florida, and is expected to convene 1,000 influential business women of color.

Donna Brazile, the former interim head of the Democratic National Committee, will be honored with the Barbara Graves Legacy Award at this year’s gala reception. The long-time Democratic strategist recently made headlines after releasing a controversial new book that discloses shocking revelations about the DNC, Hillary Clinton, and former President Barack Obama. Legendary dancer Carmen de Lavallade will also be recognized during the award ceremony for her illustrious career as a world-class ballerina and choreographer.

In addition, attendees can look forward to a host of activities, empowerment sessions, networking opportunities, and an exclusive shopping excursion. Plus, Disney’s Yacht & Beach Club Resorts neighbors Epcot Center and is just a short boat ride away from Disney’s Hollywood Studios.