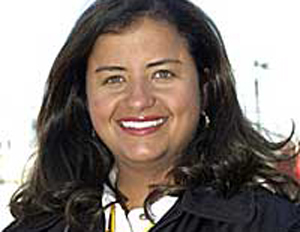 Alba Colon is yet another example of how boundaries can be surpassed and stereotypes can be overcome, reminding many of us that excuses just won’t cut it in a world of infinite possibilities. The Puerto Rico native, who graduated from the University of Puerto Rico with a mechanical engineering degree, started her career as project manager at Sterling

Her first assignment for GM was working as a data acquisition engineer for the Oval Track Group, which includes NASCAR Winston Cup, Craftsman Truck, ASA and Busch Grand National. In 1998, she was named NHRA Pro Stock Truck program manager and in 2000 was placed in charge of all of GM Racing’s NHRA drag-racing programs. Now the Sprint Cup program manager for Team Chevrolet, Colon has reached higher heights, becoming the first female engineer of color at NASCAR.

BlackEnterprise.com caught up with Colon at NASCAR’s Daytona 500 race in Florida—where No. 48 Lowe’s Chevrolet SS driver Jimmie Johnson took home the win— as she talked her early career motivator, how she paves her own lane and why education is key in motorsports.

BlackEnterprise.com: You are an history-maker being the first female of color to work as an engineer on NASCAR vehicles. Talk a bit about being a woman in a male-dominated industry.

Alba Colon: At first it was different. There weren’t many females in the sport, and there were no female engineers. So for females in general, there were a lot of things that were different, and at first it was difficult because people had to get used to the idea of working with a female. But now I know the guys, and I’m just one more person on the team. They know what I’m going to bring to the team… to make the cars better … faster …to have them engineered properly. They respect what I do, and we’re here to work together. They know that I mean business. But that took time.

There were times where maybe I was asked [when I’d show up at the track], “Who are you here with? Are you dating somebody …” and I’d say, “I don’t understand the question.” [Laughs]. It has a lot to do with respect. It’s not something you can ask for. You have to earn it. … Now I’m like one of the guys.

What motivates you to be passionate about what you do?

[Legendary race car driver] Dale Earnhardt Sr. was one of the first guys I met in this sport. He told me that first week, ‘You’re not gonna make it. I don’t give you more than a year.’… [At the time] that made me mad. That made me really mad. Inside of me, I said, ‘I’m going to show you who I am.’ It was that fire … when somebody tells me I can’t do something. … I learned through the years that if Dale likes you, he will back you … and he likes to push people. He [motivated me to do my best], and I really appreciate that he did that. Years later he told me, ‘I knew you would make it.’ So every time someone says, ‘No you can’t … No you can’t …” for me it’s a way of pushing me to [show and prove.]

Who do you count among your mentors or others who helped you along the way?

Dale was definitely one who motivated me. And Randy Dorton [chief engine builder for Hendrick Motorsports] took me under his wing. He took the time with me to show me things about the sport, engineering … He took time to nurture me in my career.

What’s the most exciting aspect of working in motorsports?

Winning. [Laughs]. Working to be the best. I love technology as an engineer, but there’s a push to do better—the competition. That’s what keeps you going.

You’re definitely an inspiration and pride of Puerto Rico. Being an advocate of ‘Each one, teach one,’ how have you been able to reach back?

Facebook definitely helps with that. [Laughs] And I go home a lot. My whole family lives there, and I interact with my alma mater. Many of the students from there follow what I do on social media. I talk with students and others about my career and about the importance of education. I tell them that you need to have your degree and you need to finish school. That’s very important.

What tips would you have for other young women aspire to be in your shoes?

Education is the key. Knowing engineering and [the mechanics] of cars helps you a lot. Professionally speaking, the knowledge will help you. And I really believe that with whatever you want in life, you have to have patience and work hard at it. A lot of [those in today’s generation] want quick satisfaction, but you really have to work hard at the things you want. It’s not easy, but you can’t give up. It’s not easy, but keep going.

Also, find someone [in your industry] who will help you and support you. Ask questions and get advice.