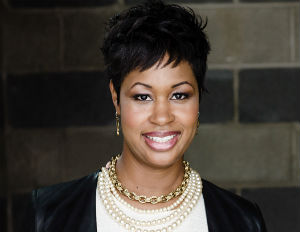 Carmita Vaughan is on a mission. She is founder and president of the Surge Institute, the Chicago-based nonprofit that equips leaders of color committed to bringing education equity to underserved communities.

“I come to this issue not as a technocrat but as someone who lived this,â€ says Vaughan, who grew up in poverty and considers her background an asset. “We can’t keep talking about education reform as the civil rights issue of our generation without acknowledging that the people suffering the injustice are not leading the movement.â€

Raised by a mother who became permanently disabled at the age of 29 (she and her husband divorced shortly afterward), Vaughan describes her mom as a “badassâ€ who fought to keep her gifted daughter out of the wretched public schools near their housing project in Birmingham, Alabama. Vaughan would grow up to earn a degree in chemical engineering and an M.B.A., and work in strategic planning, global marketing, and engineering roles at Fortune 500 companies.

Vaughan transitioned to the nonprofit space and worked as chief of staff of the Chicago Public Schools Office of High Schools. She also worked as chief strategy officer for America’s Promise Alliance.

“I did not come up through a traditional education background,â€ Vaughan says. “I started my career as a chemical engineer. I went to business school. People value that outside experience.â€

As someone in a position of influence and power in public education, she encountered few people at that level who came from the communities being served. Surge Institute is one way, Vaughan says, to provide the tools so that such folks not only have access to the table, but can create new tables.

The key feature of the Surge Institute is its one-year Surge Fellowship. Accepting about 30% of its applicant pool for its current cohort, Surge selected 12 professionals age 28—40 with at least six years’ work experience in education.

Fellows are black or Hispanic–they must represent the students they’re serving.

Surge provides training in change management, negotiating, finance, and operations, as well as development work. In addition, Surge Fellows are paired with executive coaches. “There are hard skills, executive skills, that many people aren’t getting access to, and I don’t believe they need to get $100,000 in debt to earn an M.B.A. to acquire those skills.â€

Vaughan isn’t content to just bring more black and brown faces into the education reform fold: “I wear a poor kid’s chip on my shoulder,â€ she says, stressing the value of socioeconomic diversity as well as racial diversity. “I see our communities and families from an asset perspective; not a deficit perspective–but that’s not how we are commonly discussed.â€

For more information about the Surge Institute, go to http://www.SurgeInstitute.org/.