Working Their Way Through School 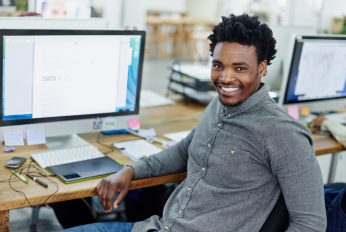 Here’s an inspiring story about a Chicago high school that was recently threatened with closure but has now turned around.

Chicago Technology Academy is a contract school—similar to a charter. The high school uses month-long internships to expose its seniors to the world of work—and inspires them to reach for college and professional success in the process.

Hechinger Report has written an article, excerpted below, about the school’s remarkable progress, and the long road it still has ahead of it.

One spring morning, 22 stories above Chicago’s Wabash Avenue, Aurice Blanton ignored the stunning spring view of Lake Michigan. He had work to do. He toggled his computer between a budget spreadsheet and his color-coded schedule, double-checking figures for an upcoming meeting with his supervisor at CNA Insurance.

Blanton, a high school senior, was interning for the firm’s information technology group. He liked the spreadsheet work, he said, not because of a newfound love for insurance or accounting, but because it has taught him that he’s more capable than he thought.

“This was something I never thought I could do,” he said. “I hated math. Numbers used to intimidate me.” The day’s other meetings included lunch with CNA’s senior vice president of corporate communications, a mini-lesson on project management, and a check-in with the staff member serving as his mentor.

As an African American teenager from inner-city Chicago, Blanton didn’t look like most of the other people in the high-rise offices, and that was kind of the point. Most students at his school, Chicago Technology Academy (ChiTech for short), don’t come from places with a lot of college graduates and corporate connections, the sort of folks who can show young people, by example, that they can prosper in the professional world.

So, for the past two years, every ChiTech senior has spent a month out of school working full time at (largely) tech-oriented internships. With this “Real-World Learning” program, ChiTech joins a growing number of schools devoting big chunks of the year to internships, despite the perennial classroom time crunch.

The internships are also part of a larger turnaround effort at ChiTech, centered on project-based learning. The school, where more than 90% of students qualify for free or reduced-price lunch, and 14% are counted as homeless, was founded in 2009 to teach skills valued by the booming technology sector.