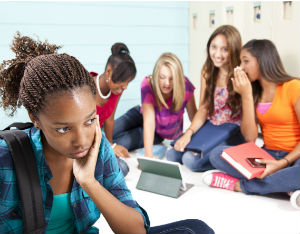 My junior high school needed a day like this. I remember being a sixth-grader and lining up in the gym for our next class, and for some unknown reason, one girl in the line began cruelly berating another girl, insulting her looks, hair, and clothing. The other girl didn’t cry, but she was obviously humiliated and wanted to disappear. The bully didn’t let up, but continued browbeating the girl. I stood in line, sort of terrified, but also transfixed by this threatening girl and her cowering victim. I didn’t want to be next, so I stood there quietly.

Then, another student named Karen, who had long, black hair, confronted the bully. To my utter amazement, the bully didn’t smack Karen or punch her. She now stopped upbraiding the other girl and began to defend her reprehensible actions to Karen. In a moment, she slithered away. I think the rest of us on line were shocked but also quietly awed by Karen’s bravery.

Stand Up to Bullying

At the time, I didn’t think of that behavior as bullying. I just thought that some “badâ€ kids “picked onâ€ other kids for no apparent reason.

But bullying is a serious problem. Some young people have been seriously hurt and even killed, or killed themselves, because of bullying. Now that bullying behavior can go online, it’s even worse.

Here’s an excerpt from an article about the history of World Day of Bullying Prevention:

“Bullying has been a growing problem in schools, especially in past years. While some consider hazing and the abuse that some children take in school to be a typical part of the adolescent experience, rising suicide rates and violence in school has led officials to start taking a hard, zero-tolerance stance on bullying. If you were picked in school as a kid, or maybe it continued into your college and adult years, World Day Of Bullying Prevention is bringing attention to your plight, and the plight of others who experienced this incredibly difficult, and dangerous, part of many children’s lives.

Bullying has existed probably as long as humans have, but in 2007 two young men by the names of David Shepherd and Travis Price decided that they’d simply had enough. On the first day of school, a day like any other as you may imagine, a student by the name of Jadrien Cota had made a vital error for a young boy starting off a school year. This mistake?

He’d worn a pink shirt. It took almost no time at all for a group of bullies to notice the color of his shirt, and they immediately started giving him a hard time about it.”