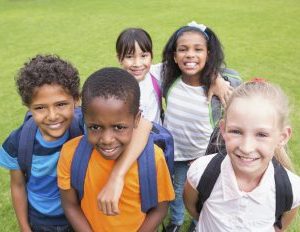 Pasi Sahlberg is a Finnish educator and visiting professor of Practice in Education at the Harvard Graduate School of Education. His best-selling book, Finnish Lessons, which relates the history of Finland’s spectacularly successful education reform, has been on my list of books to read for some time now.

At the New York Times Higher Ed Leaders Forum in June, I interviewed Sahlberg in person (and afterwards wrote this post).

On World Teacher’s Day, here’s a peek into the way the Finns do education from the perspective of an American father whose son was enrolled in school there. He wrote about the experience on the website of the Los Angeles Times.

Read the whole article. By the end of it, you may want to figure out how you can send your kids to school in Finland. We get you started with an excerpt.

The Harvard education professor Howard Gardner once advised Americans, “Learn from Finland, which has the most effective schools and which does just about the opposite of what we are doing in the United States.â€

Following his recommendation, I enrolled my 7-year-old son in a primary school in Joensuu, Finland, which is about as far east as you can go in the European Union before you hit the guard towers of the Russian border.

OK, I wasn’t just blindly following Gardner–I had a position as a lecturer at the University of Eastern Finland for a semester. But the point is that, for five months, my wife, my son, and I experienced a stunningly stress-free, and stunningly good, school system. Finland has a history of producing the highest global test scores in the Western world, as well as a trophy case full of other recent No. 1 global rankings, including most literate nation.

In Finland, children don’t receive formal academic training until the age of 7. Until then, many are in day care and learn through play, songs, games and conversation. Most children walk or bike to school, even the youngest. School hours are short and homework is generally light.

Unlike in the United States, where many schools are slashing recess, schoolchildren in Finland have a mandatory 15-minute outdoor free-play break every hour of every day. Fresh air, nature, and regular physical activity breaks are considered engines of learning. According to one Finnish maxim, “There is no bad weather. Only inadequate clothing.â€

One evening, I asked my son what he did for gym that day. “They sent us into the woods with a map and compass and we had to find our way out,â€ he said.

Finland doesn’t waste time or money on low-quality mass standardized testing. Instead, children are assessed every day, through direct observation, check-ins, and quizzes by the highest-quality “personalized learning deviceâ€ ever created–flesh-and-blood teachers.

For more, go to the Los Angeles Times.