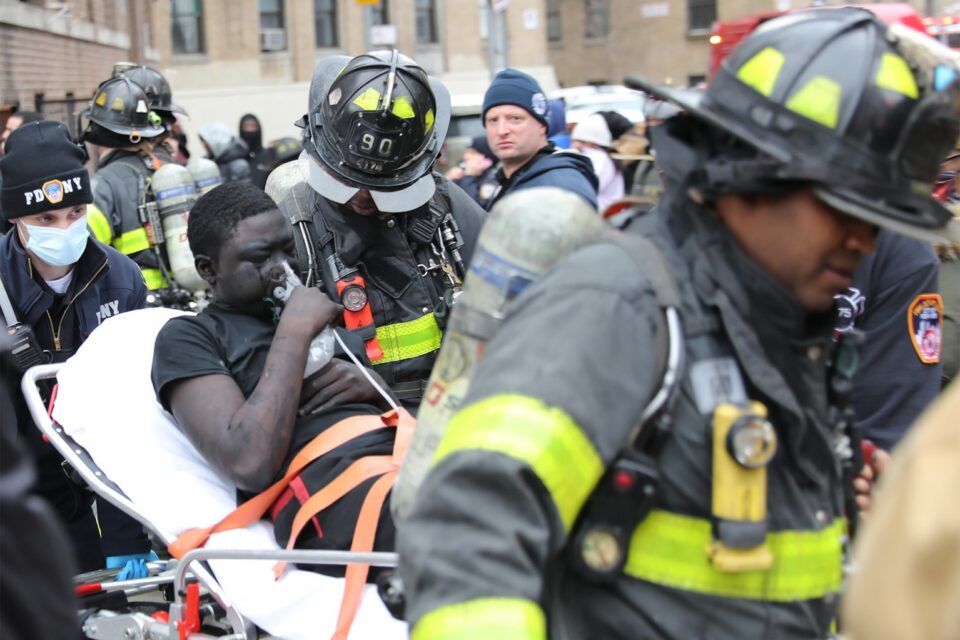 FDNY Treat A Child Outside Of Bronx Building (screenshot)

FDNY firefighters are calling a Sunday morning fire that claimed 19 lives, including those of nine children, the worst fire emergency since the Happy Land fire in 1990.

According to the New York Post, the four-alarm fire broke out around 11am in the Tremont section of the Bronx. It took about an hour for firefighters to get the blaze fire under control, with flames reaching almost to the top of the 19-story building.

“There were bodies being carried off every floor,” one first responder said. “It was the worst fire I saw in 30 years.”

With 32 tenants having suffered life-threatening injuries, FDNY Commissioner Daniel Nigro says he and his team expect the number of casualties to go up.

“The last time we had a loss of life that may be this horrific was at Happy Land Fire over 30 years ago here in the Bronx,” Nigro said, referencing the 1990 tragedy that claimed 87 lives when a man set fire to the Happy Land Social Club.

An additional nine people were taken to the hospital with serious injuries and 23 more treated on site or at area facilities with lesser injuries. A firefighter was also among the injured.

FDNY Uniformed Firefighters Association president Andrew Ansbro says first responders would have been able to rescue more people, had it not been for COVID-related staffing shortages.

“[The first team to arrive] only had four firefighters instead of the five they are called for because of people out sick because of Covid,” he said. “We feel this is an absolute case where staffing would have made a difference. Several of the first engines were in the same situation. If there was adequate staffing the fire could have been put out faster and people would have received medical aid sooner.”

One tenant said many of tenants may have ignored the fire alarm at first, thus failing to evacuate the building before things got out of control.

Authorities have not yet determined the caused the fire. They say that the situation was exacerbated by the fact that the door of the unit in which the fire started was left open, expediting how quickly it was able to spread.