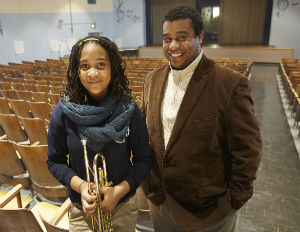 Now WQXR is at it again, only this time the instrument drive has been expanded both geographically and in the number of instruments to be collected. People throughout the radio station’s listening area–the New York metropolitan area, northern New Jersey, Westchester, and Long Island–can donate their gently used instruments to the drive. This year’s goal? 6,000 instruments, which will be distributed to public school music programs in New York City and Newark.

I spoke with music teacher Jerel Witsell about the instrument drive and what it’s meant to him as a teacher who’s new to Van Siclen Community Middle School in the East New York section of Brooklyn.

“My goal is to have an arts center at the school and to have students who could apply to Frank Sinatra or the other arts high schools,â€ says Witsell. “I want to bring music to East New York.â€

That’s an ambitious goal, but Witsell is supported by the WQXR Instrument Drive which may be helping to fuel some of that ambition. The three-year-old school has always offered a music program, but it was previously after school, says Ladayah Josiah, a 14-year-old eighth grader who is an avid budding musician.

Now that Mr. Witsell is at Van Siclen, music class is offered during the day. Through the WQXR Instrument Drive, the school received several instruments.

“I’m pushing for a symphonic band,â€ Witsell says. A symphonic band plays symphonies (of course), other classical music, and pop music. It is not a marching band. “I’d like my students to play in Brooklyn Borough-Wide,â€ which provides students the chance to play more demanding pieces than they would be assigned in school. They practice together on Saturdays from October to June and then perform at Carnegie Hall.

Ladayah loves the violin and hopes to begin lessons soon. “Mr. Witsell is teaching us how to read music,â€ she says, adding that she can already read music “a little.â€ She plans to audition for one of the city’s music high schools and says music will be part of her life when she is an adult. “I would like to play professionally,â€ she says.

If you live in the WQXR listening area, here’s information on how you can donate your gently used instrument to this important drive benefiting music programs in New York City and Newark public schools. Go to https://GiveInstruments.org/drop-locations.