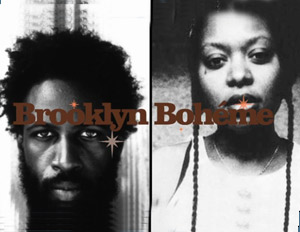 What do Mos Def, Spike Lee and Chris Rock have in common with Harlem Renaissance heroes Claude McKay, James Weldon Johnson and Zora Neale Hurston? They’re all part of a second wave of African American greats to conjure up cultural magic inside a pulsating enclave of New York City–the adjacent Brooklyn neighborhoods of Clinton Hill and Fort Greene.

It’s what historian, filmmaker and long-time Fort Greene resident Nelson George looks to expose in his forthcoming documentary Brooklyn Boheme. The prolific author and journalist–who has proudly repped the area since 1985–explains that the neighborhoods have long served as home, temporarily and permanently, to some of the most prominent Black artists of our time, including jazz legend Branford Marsalis, poet Saul Williams, soul singer Betty Carter and best-selling author Terri McMillan.

“After [Spike Lee’s] She’s Gotta Have It came out in 1986 there was this real influx of young Black folks of all kinds–from Bill Stephney [who signed rapper Chuck D to Public Enemy] with Def Jam to Daddy-O with [pioneering hip-hop crew] Stetsasonic,â€ explains George, who helped finance Lee’s groundbreaking film. “In the ’90s Erykah Badu came and lived here while she was recording her first album. She became part of that whole Brooklyn Moon alternative scene, including Mos Def, Common and Talib Kweli. They joined a long list of filmmakers, visual artists, writers and actors who were either homeowners or renters there during pivotal periods, and I wanted to put these eras in Brooklyn on the cultural map of the country.â€

George, who will release his fifteenth book, The Plot Against Hip-Hop, this November, has been shooting the black-and-white documentary–which took runner up honors for the Audience Award at the Urbanworld Film Festival recently–since 2007. Currently scheduling screenings at several more national festivals in the coming months, George’s focus now is getting his Brooklyn love letter before a wider audience. “We’ve had a lot of interest in the film so I’m optimistic it will sell to someone or an institution, hopefully over the next year,â€ he says. “That’s my goal.â€

It shouldn’t be a hard sell considering the doc features cameos by an all-star cast of area natives and emigrating notables, among them award-winning writer and performer Carl Hancock Rux and actress and activist Rosie Perez. And they could easily have been swapped out by any number of other luminaries to lay down roots in the district, including poet Ntozake Shange, singer Santigold and actor Wesley Snipes.

George says he’s proud to serve as griot for an ongoing cultural story that’s never been told via film, particularly as the neighborhoods continue to gentrify–much like Harlem did. “I’ve lived in Brooklyn my whole life and it has always seen change,â€ he explains. “Neighborhoods stay stable for one, two or three generations but then they see a shift, just like [Fort Greene and Clinton Hill] are. That’s why it’s great to be able to document these critical periods.â€

View the trailer for the film below