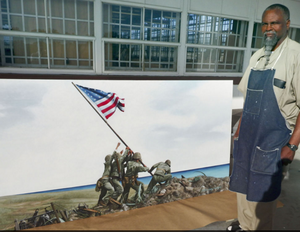 In the wake of a system that gives little to no chances, Mr. Fulton Leory Washington was able to get a second chance at life. Once known by his case number CV–1-08491-DDP, Mr. Washington is now widely celebrated for his artwork, instead of for past crimes that he did not commit. Washington was one of 58 prisoners that former President Barack Obama granted clemency to, during his time in office. The artist was once incarcerated for a non-violent drug offense.

With his paint brush, Washington tells a different story than the one previously painted by the system, which kept him incarcerated for 21 years.

BLACK ENTERPRISE: What were your feelings, when the trial verdict was initially read?

Washington: When the verdict was read, I was in total shock. I couldn’t understand that you could be given life without parole for a crime you didn’t do. I researched every thing I could regarding the court of law. I felt as if I would never return home again.

BE: Which pieces of your original artwork inspires you most?

Washington: That answer has two parts. [First], back in 1997, the late Professor Karen Smith asked me to draw people that I worked with. I did a rough sketch of the people that I worked with prior to my trial, and Karen reached out to each individual, to have them testify that I was 80 miles away from the scene of the crime, when the government said I was at a store buying chemicals with their agent.

My second prized piece was the Emancipation Proclamation of 2014, which is a reenactment of when Abe Lincoln freed the slaves. I repainted it with current folks, who made an impact on me today. I painted myself renegotiating my release months before the president let me go.

BE: How did you stay inspired during your struggle?

Washington: I would say, I stayed in prayer for about 20 hours a day. I remained thankful for every chance at joy and pain. I always had a piece of artwork to finish. I would paint my pictures in my mind when I went to sleep, so that I had the urge to get up the next morning.

BE: Have you been influenced by any other artists?

Washington: I’ve been influenced by a few artists, such asÂ Gary Green, Bernard Stanley Homes, George Evans, and a host of other people.

BE: How are you now spreading your message for change?

Washington: The message I give to younger folks is that you can be whatever it is you want to be. Also, don’t be afraid of starting over, because even in that process, you can still be what you want to be. When I first came home, I did a community service project where I taught art in school. I teach students to use art as a form of communication.

Mr. Washington now holds his head up high with pride, never allowing any setbacks toÂ  determine his future. He knows the value of creating a new start, and continues pushing to spread love, life, and harmony through his artwork.