Yale Study Reveals that Racism Reaches Down to Preschoolers 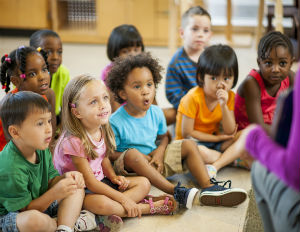 The Yale Child Study Center has released findings from its first-of-its-kind research, to reveal some pretty depressing news. Preschool teachers, those working with children who are under the age of five, for the most part, show signs of implicit bias when administering discipline. This was true of both black and white teachers.

During the study, the teachers were told that the researchers were observing how quickly they could detect misbehavior. The teachers then watched brief videos of preschool children: a black boy, a black girl, a white boy, and a white girl. Using sophisticated eye-tracking technology, the researchers found that the preschool teachers “more closely observe blacks, and especially black boys, when challenging behaviors are expected.” In other words, both black and white teachers looked at black preschoolers more, particularly black boys, assuming that they would misbehave.

The study basically confirms that we live in a pervasively racist society, and that even very young children do not escape its harmful reach. The “automatic association between race and perceived threat of aggression has been shown, even when the black face presented was that of a five-year-old boy,” according to the Yale research study brief.

According to a statement released by the Yale study, previous research has shown that expulsions and suspensions are often the result of adult decisions, not necessarily the child behaviors. A disturbing article in the New York Times recently showed just how arbitrary a decision about suspension can be. Yet, suspension can wreak all kinds of havoc in a child’s life, and, as the America’s Promise Alliance reports, suspensions don’t work.

How did we get to be such a punitive society? If a preschooler is suspended repeatedly, maybe there’s a problem that can be addressed. Unfortunately, the Yale research also revealed that white teachers become overwhelmed when informed that a preschooler may have larger problems, such as poverty or home stressors that affect the preschooler’s behavior.

Black teachers responded moreÂ empathetically to such problems, but in general, were harsher in how they administered discipline to all children. Overall, however, they hold black preschoolers to higher standards and expect more of them both academically and behaviorally.

The good news is that bias can be reduced through training, and I’ve written about a Stanford researcher who has conducted such training in his work.

Get Uncomfortable! 5 Ways to Step Into Your Abundance Zone

Is Your Broken Behavior Causing You Money Woes

FacebookTwitterYoutube
← Get Uncomfortable! 5 Ways to Step Into Your Abundance Zone ← Is Your Broken Behavior Causing You Money Woes
×
'