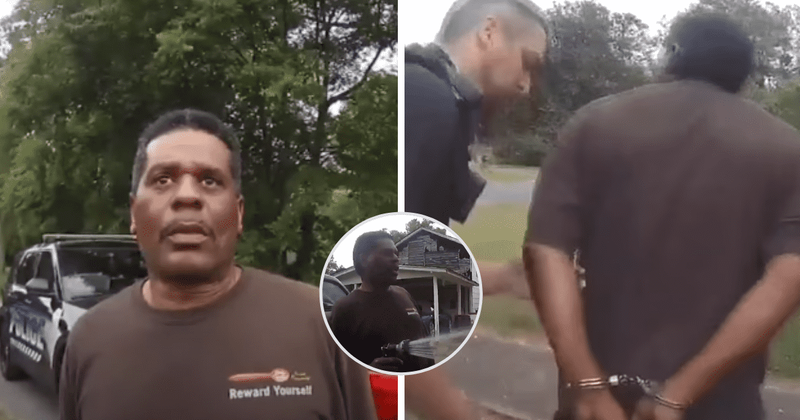 A Black pastor, Michael Jennings, was arrested and charged in May 2022 with obstructing government operations for not providing identification. The incident occurred while Jennings was in his neighbor’s yard watering their flowers. Now, he is filing a lawsuit against the officers for racial profiling.

According to NBC News, one of Jenning’s neighbors, a white woman, complained to the police about a suspicious person outside his neighbor’s home.

A responding Childersburg officer can be seen in body camera footage approaching Jennings while he waters his neighbor’s flowers with a hose. The officer asked him about his neighbor’s parked car and if he lived at the home. He also informed the pastor that a complaint had been called in.

“I’m supposed to be here. I’m Pastor Jennings. I live across the street,” Jennings said as tends to the flowers. “I’m looking out for they house while they gone.”

Despite neighbors vouching for him, police still arrested and handcuffed the pastor for declining to show identification when asked. Jennings learned at a later time that the woman who reported him didn’t recognize him as the culprit.

“He lives right there and he would be watering their flowers. This is probably my fault,” the woman told the three Childersburg officers before he was taken into custody.

Attorneys for Jennings argue that Jennings was not required to show identification “because he was not in a public place,” according to a news release, per NBC.

The pastor, in disbelief, told the officers: “Y’all racially profiled me.”

According to The Daily Mail, the charges were dropped a month later, but Jennings of Vision of Abundant Life Ministries said that he is still dealing with the “emotional toll” of the arrest.

“This video makes it clear that these officers decided they were going to arrest Pastor Jennings less than five minutes after pulling up and then tried to rewrite history claiming he hadn’t identified himself when that was the first thing he did,” attorney Harry Daniels said, per NBC. “This was not only an unlawful arrest. It’s kidnapping. It’s irrational, irresponsible and illegal.”

“Chief McClelland and the Childersburg Police Department may think all they have to do is drop the charges and this all goes away,” said Bethaney Embry Jones, another attorney for Jennings.

“This was a crime, not a mistake. I would hope that the Childersburg Police Department would understand the difference.”