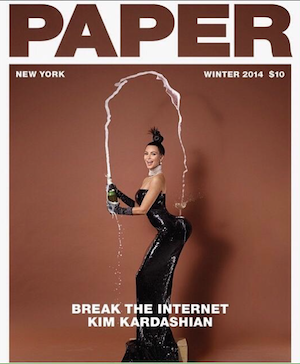 “Kim Kardashian breaks the Internet,” was popular on the Web yesterday, causing quite a fervor. “Break The Internet,” was a trending topic since it was pegged to a startling visual of the reality TV millionaire mogul in the buff.

Meant to shock and awe people into copping numerous issues of Paper Magazine, seeing North West’s mother with her hair in a bun and a clear view of her behind left one question: What is Kanye West’s role in affecting her brand integrity?

Tuesday, Paper Magazine tweeted a link to its new dual covers (one pictured above left), but it was the NSFW version that made everyone break out their 140-character prose.

That image, which features the Kardashian showcasing her buttocks, was shot by Jean-Paul Goude, a renowned French artist known from his work with the “Champagne Incident” and with Grace Jones. Less than 24 hours since the reveal, people are flipping out over Kim K’s cover while her husband tweets nonchalantly about it all.

Let’s look at West’s dating track record: Before Kim, there was Amber Rose, and much like his famous wife, the Philadelphia stripper-turned-arm-candy was imbued to show off her assets in order to raise her celebrity profile. Don’t believe us? Take a look at the rapper’s history to see his imprint. The bombshell, at the time, was West’s girlfriend, and she gained fame from parodying Grace Jones’ cover in a shoot for Complex Magazine in 2010.

Fast forward to today and it is interesting to see how much influence the Louis Vuitton Don carries as head of his own household. Already credited with improving his wife’s sense of style and dress, the music artist seems to be making sure any and everything dealing with Kim is deemed as high-end art. Is it his place as the husband to ensure that this happens? Or does his latest move come at the cost of his wife’s brand integrity?

Continued on the next page…