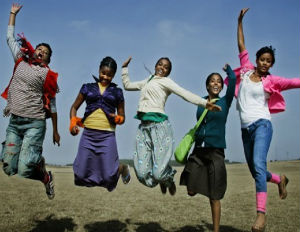 The Ethiopian girl band, Yegna, is more than just five cute teens with a catchy hook. These ambitious young ladies are challenging their whole community to acknowledge women in a new way.

According to Upworthy, they’re a pop music group, a talk show, and are featured in a popular radio drama. The huge teen-brand reaches 5 million listeners in their country, and focuses on motivating young women to think differently about themselves and their identity.

It’s been reported that out of the 9 million girls living in Ethiopia. 1 in 3 Ethiopian girls can’t read. Additionally, Â 1 in 3 don’t get to attend school, and 2 out of 3 women believe that wife-beating is justified–leaving a large portion of the population poor, uneducated, and destitute.

The multi-platform brand, Yegna, means “oursâ€ in Amharic, and their message Â is all about empowering girls and creating positive change. According to the organization, Girl Effect, a hub for girls making change around the globe, 84% of female listeners say the band helped them become more confident, and 76% of girls tuning in say Yegna inspired them to continue their education. But, their impact doesn’t stop with Ethiopian girls, they are reaching out to boys as well, creating a sense of unity between sexes.

“They are so cool. It has exceeded my expectations,â€ said one young man of the group in the video below. “Since girls are our sisters, our mothers, and much more– we should do everything we can to support them.â€

In the video below, a woman explains how listening to the teen radio drama encouraged her to become an entrepreneur, and begin her own business despite hardship.
To learn more about the girls and how they are creating change, check out the video presented by Girl Effect.