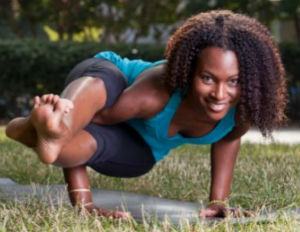 If you follow the Yoga world, it is likely you have seen Faith Hunter.Â  She’s been on the covers of Yoga Journal and Om Magazine, for Origins magazine and appears at various conferences all over the world. Yoga has made a powerful and lasting impact on her life, as it was instrumental in helping her deal with the untimely passing of her older brother from AIDS.Â Â  Through her practice, she summoned the courage to live life more fully and feels it is her mission to spread the message of practicing a healthy and positive lifestyle.

In addition to owning the popular Embrace Yoga Studio in DC, Hunter is also a writer, yoga podcaster, model, and Director ofÂ  Faith Hunter Yoga: Embrace Your Flow Yoga Teacher Training Program. She not only brings a passion to her brand but also a strong business acumen, ensuring success every step of the way.

This winning mix of business savvy and heart is why we chose Hunter to be a part of BlackEnterprise.com’s Yogapreneur series celebrating National Yoga Month.

I’ve been practicing for 20 years since I was in my 20s. I had been working in the non-profit industry for years and it was stressing me out.Â  I asked myselfÂ  “What is keeping me here?â€Â  Things were hectic and I thought “What is it that I love the most; what do I enjoy doing?â€Â  This practice has given me so much so why not be able to share the tools, techniques and experience.Â  Yoga gave me so much.Â  It’ s helped me to find balance and serenity. So, I needed to give back.

My Yoga business has been growing tremendously, which is directly connected to the growth of Yoga.Â  It was still kind of new when I started but now we have more people in the mainstream who are craving a shift in their lives.Â  They see their friends much happier and much more connected and think “Maybe I need to do something less traumatic on my body.”Â  As it expands to the general public, it expands to by business as well. Â  I love to see people walking down the street with their suit on and their Yoga mat in tow.

How do you deal with running a business during difficult economical times?

I make sure that I offer really great deals to people.Â Â  I also make sure that my financial plan is intact and I have enough reserve money to ensure that if there is an (economic issue), that I can use the reserve to cover the expenses.Â Â  If I’m struggling, then I know the clients are struggling but they can still get their Yoga in if I throw out a couple of deals.Â  I also offer deals to people in the non-profit sector as wells as students. There is also a weekly class that is free to the community.

What are some of the challenges you face being an African-American Woman in the Yoga space?

I’m not one to pull the race card but there is a certain perception within the Yoga industry amongst people that own businesses or run conferences.Â  They sometimes feel that they can’t take a risk on a Black person because it’s not their target audience.Â Â  The thing I like about Yoga Journal is that they take a chance on that market.Â  There are people of color practicing and they make sure that their magazine shows that.

One of my teachers is Hispanic and she said to me “I’m excited about teaching here because when I walk in the room, it’s multi-cultural.â€Â  I’ve seen Muslim women who are wearing headdresses practicing Yoga.Â  I also hire other people of color, which doesn’t happen that often and I pride myself on multi-cultural hiring practices.