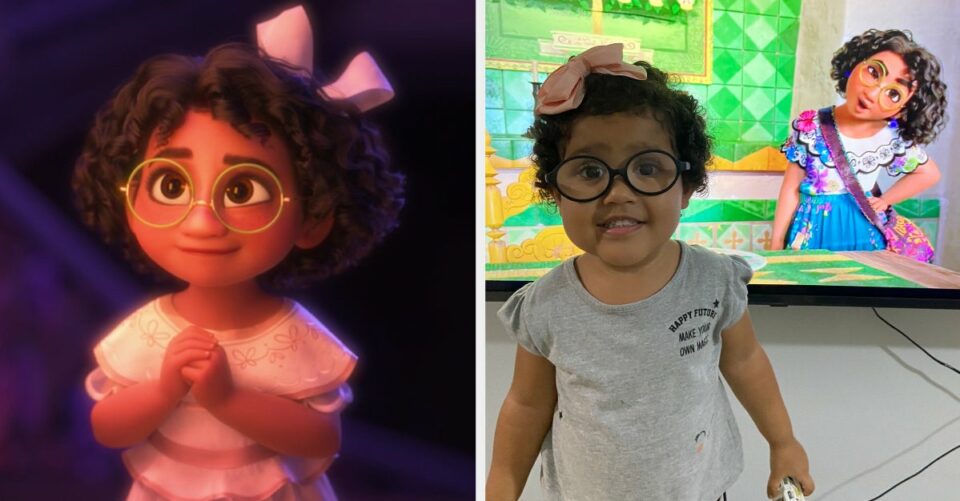 While the musical soundtrack for Encanto is topping the charts, Disney’s latest animated film is drawing praise from Hannary Araújo, who captured a video of her 2-year-old daughter adorably connecting with young Mirabel.

The joy on Manu Araújo Marques’ face spoke volumes when she saw Mirabel with glasses and curly hair—a genuine representation of her.

On Jan. 8, Araújo posted a video of her daughter watching Encanto for the first time on her daughter’s Instagram. The video opens up with scenes of the toddler pointing at the television, while in awe of Mirabel. She says, “It’s me mommy!” in Portuguese and repeats it again.

In response, her mom says “It’s you? Look at mommy, let me see if it’s you,” and her daughter turns to face the camera to show her their resemblance.

Later, when Mirabel grows into an adult, the 2-year-old still recognizes how much she looks like her and says “I grew up, mommy.” Araújo is pleased, and ends the video with “How beautiful.”

Based in Minas Gerais, Brazil, Araújo told BuzzFeed just how amazed she was when she saw the joy on her daughter’s face.

“There’s nothing better than seeing your child’s joy—especially being represented in a Disney movie!”

As it turns out, Mirabel breaks a Disney main character tradition as one of the few lead characters—and the first-ever female lead—to wear glasses. Given that she is the only ungifted one in the family, she still serves as the key to keeping the magic alive. Her character, sporting large green glasses, resonates with the Araújo family even more.

“My biggest fear when I learned that Manu would wear glasses would be bullying at school! But over the course of the movie, I completely changed my mind and saw that princesses were glasses too!”

Since its posting, the sweet video went viral, gaining nearly 15,000 likes and the attention of Stephanie Beatriz, who voices Mirabel in the film.

The magical representation of her daughter in the Disney film has inspired Araújo to shed light on her experience, so that other children can discover the joy of seeing themselves represented.

“If I could create custom dolls for each child, I would open a factory right away! Because you don’t know the importance this generates in a child’s life! Just as she is being represented by a princess, I want other children to feel the same joy as hers—the same magic!”

The film has touched the lives of many little children whose generation will acknowledge the importance of positive representation. Araújo has a message for Disney, and the crew behind the film:

“You changed our lives and showed us the true meaning of representation for the whole world, especially for our children — those who will build a better future!”