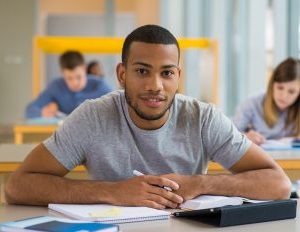 Yesterday evening, I spoke with Trabian Shorters, founder and director of the BMe Community (which you can read about here). The organization’s goal is to reframe the narrative around black men, which Shorters boldly describes as American assets.

As he says of the organization, “We have over 22,000 members, offices in six cities, brand about 200 events a year, and have funded 165 black men called “BMe Leaders,” whose organizations educate children, protect streets, create economic opportunities, and work on justice for all.â€

Perhaps something is in the air. An Education Week article describes the work of Professor Tyrone Howard of the UCLA Graduate School of Education. Howard and his team of researchers have developed the Counter Narrative Project, which focuses on young men of color that are succeeding, who use words like “determined,â€ “hardworking,â€ “responsible,â€ and “leaderâ€ to describe themselves.

“At times in California, as well as in other states across the U.S., it seems there is a cottage industry churning out grim statistics about the lives of young black and Latino males.Â  From the educational achievement gap to higher rates of unemployment and incarceration, the data paints a pervasive and troubling picture. Needless to say, these challenges are real, persistent, and require intense intervention.

But recently, a team of researchers at the UCLA Graduate School of Education and Information Studies, led by Professor Tyrone Howard, have challenged that singular portrayal. It’s not that they believe the data is inaccurate. It’s that it is incomplete and fails to account for the success and achievement of young men of color.”

As a counterpoint, Howard and his colleagues haveÂ conducted and published new research–The Counter Narrative Project–which goes beyond a compilation and analysis of negative data points, to explore and highlight the success of young black and Latino males in Los Angeles.

The research, Howard says, “takes an unapologetic stance in stating that there are young men of color who are thriving in their homes, taking on leadership roles in their schools, and making a difference in their communities.â€

The Counter Narrative Project observed and conducted interviews and discussions with more than 200 black and Latino males attending urban high schools in Los Angeles.Â  The research shines a spotlight on resilient, intelligent, and caring young black and Latino men across the county.

Their stories provide a fuller picture, too often missing from mainstream portrayals. The average grade point average for these young men was 3.6; most were college bound, and many played leadership roles in their families, schools, and communities. None had been arrested, and many held jobs to help support their families.