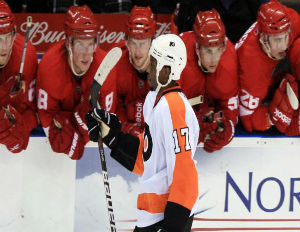 Racism in America is an ongoing conversation. The narrative of America not being a racist country is something that is currently going on with several Black politicians cosigning the theory—despite current events—we know not to be true.

Case in point, according to USA Today, racism is alive and well and taking place in a youth hockey league in Virginia.

At a hockey game earlier this year, young Black players Brandon and Landon Bernard were taunted by players from the opposing team when they constantly made monkey noises whenever he skated past them or when he was controlling the puck. When the two teams played each other again in March, the same disruptive, ignorant behavior continued from the opposing team. Then a member of the team, Ashburn Xtreme, skated up to Bernard and called him a “n—–.” Instead of retaliating, Bernard approached the referee of the game to inform him of what took place and the opposing team didn’t take any action at all.

RELATED CONTENT: HBCU Hockey Program May Get Its Start at Tennessee State University

USA Hockey did take action and suspended the team’s coach, Karl Huber, for 10 games, and hockey director Troy MacCormick for five games, and an unnamed player for a total of three games. Although they were disciplined, Bernard, his father, and the team coach for the Frederick (Maryland) Freeze, were not satisfied as they were not informed of any formal discipline until more than a month later. Bernard and his twin brother Landon, who both are still on the team feel isolated by their league and USA Hockey.

“I don’t think the game is as fun, as pure, as awesome, honestly, as it should be if everyone can’t enjoy it,” said Duante’ Abercrombie, a member of the Washington Capitals’ Black Hockey Committee. “There’s an air of ‘you don’t belong here’ that still is in many rinks in America.”

There is a life lesson that Lionel Bernard, father of the twin hockey players, has taught his sons.

“If this happens again, the first thing you should do is reach out to the referee or coach. Don’t retaliate or get upset.

“I also told them that this is what you can expect when you’re playing a sport that has a limited number of minorities playing it,” he said. “You’re going to run across this thing. But note that you’re not the first individuals who have faced racism in sports.”