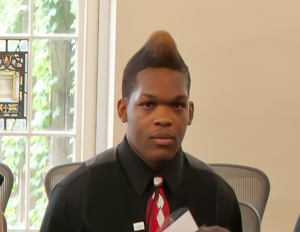 President Obama hosted the 3rd Annual White House Science Fair, highlighting the student winners of a broad range of science, technology, engineering and math (STEM) competitions from across the country, on Monday, April 22. The science fair featured 100 students from over 40 states and represented 45 different competitions and organizations that recognize the next generation of innovators. The students’ projects ranged from temperature-regulated pads for football players, which will maintain safe body temperatures on the field, to economically-viable algae biofuel, among other impressive ventures.

There were several African-American students who participated in the 2013 Science Fair; BlackEnterprise.com recognizes these young, black phenoms:

Fun fact: Halmon increased his GPA by nearly 2.6 points–from 1.0 to 3.6–once he transferred to Perspectives.

Growing up on the south side of Chicago, Anthony Halmon encountered a few bumps in the road, but the 19-year-old innovator is determined not to become another statistic. Although the death of his father caused the Perspectives Leadership Academy senior to second guess his purpose in life, Halmon turned things around–ditching the fighting, gang-like activity and bad grades–with the help of Pastor Tyrone Gaston of Restoration Ministries Church of God in Christ.

“If you actually make the choice to want to be something in life, then you can be,â€ says Halmon. “There will be nothing or nobody that can actually stop you.â€

It’s that attitude that fueled the Chicago native to create Thermofier, a pacifier with a built in thermometer and soothing gel that helps ease parents’ worries and babies’ discomfort. Halmon won a position as a Posse Scholar for his dedication to STEM.

BlackEnterprise.com spoke to the Network for Teaching Entrepreneurship (NFTE) scholar about Â what it was like participating in the annual science fair, why more young people need to get involved in STEM and where he sees himself in the next five years.

BlackEnterprise.com: How was your experience participating in the 2013 White House Science Fair?

Halmon: It was basically a new experience for me.Â  I never pictured myself actually in the White House, and I never really saw myself actually shaking the hand of the president of the United States of America. And then, on top of that, I saw many young innovators the same age as me. It was very inspiring!