Young Gifted and Black: 4 Ways to Support Your Gifted Child 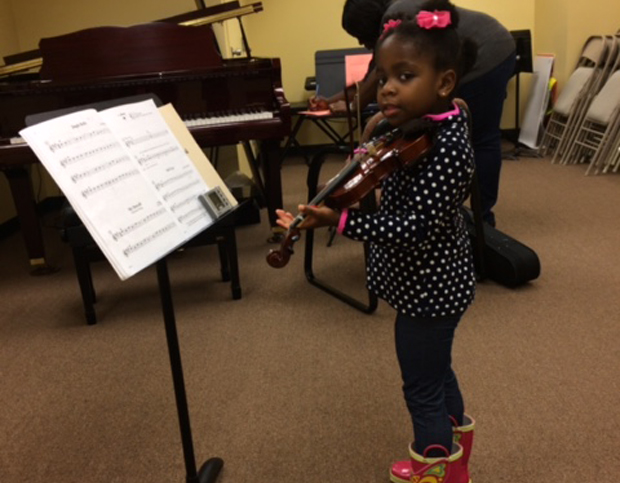 “We thought something might be different about her because she was reading before she was 3,” says her mother, Genevievette Walker-Lightfoot. “We also thought she may have just memorized books the way little kids do.”

But when her mother read a book to her that she hadn’t read before, the not-yet-3-year-old read it.

“I thought it was a little precocious giving a 2-year-old a violin,” Walker-Lightfoot says. “I told her she was too little. Even the smallest violin was too big for her. So we came back a year later and picked one out.” Gia was evaluated and soon started the Suzuki method at the Roberson School of Music. (The famous Suzuki method begins music lessons with the youngest children, even before they’re born.)

“She absolutely loves it,” Walker-Lightfoot says. “We’ve never had to argue with her about practicing. ‘Ode to Joy’ was her Christmas recital number.”

Walker-Lightfoot mentioned testing to her pediatrician, to verify that Gia is a gifted child, “but I wasn’t sure where that would lead.”

Walker-Lightfoot was reluctant because she, her husband, Johnathan, and their only child live in Howard County, Maryland, where children must be 5 by Sept. 1 in order to start school.

That hard and fast rule wouldn’t work for Gia, who was born in December. She was not only already reading, she knew her colors and could count.

“From what I’ve read, if bright children aren’t challenged they can get disruptive–because they’re bored.”

The Lightfoots found an academic-focused Montessori school where youngsters can be taught the kindergarten curriculum if they’re 5 by Dec. 31, as long as they pass their work.

Gia is now thriving in an environment of diverse learners. In a class of 11, five students are East Indian, three are African American, one is biracial, one has a Spanish surname, and one is white.

The Lightfoots intend to keep Gia in Montessori. They plan to transfer her to another school in the network that goes up to grade 5.

Based on the Lightfoots’ actions, several key steps may have helped to bring about their daughter’s positive experience.