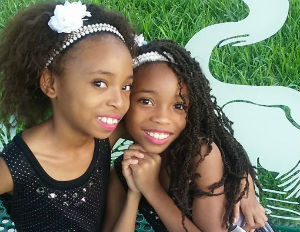 Eight-year-old twins Brooke and Breanna Bennett (shown left), have spent most of their lives in Dubai, United Arab Emirates, where they received a rigorous, hands-on education and teachers thought of them as gifted. Since returning to the States with their parents, Adeyela and Bradley Bennett,Â the twins–in fact, the whole family–have had a rude re-introduction to American racial segregation and educational politics.

[Related: Children of Color Are Gifted, Too]

After diligently researching, the Bennetts chose a home to rent based on the A rating of the neighborhood school. With a full-time gifted program–unlike some schools which may offer a part-time gifted program or none at all–the school is also fairly diverse, with a 20% black student body. It is majority white. But instead of being rewarded for their diligence, the Bennetts encountered obstructionism when they asked about the gifted program. “‘It’s such a long process,’ they told me,â€ Adeyela says. Discouraged from pursuing the gifted program, she enrolled her children in the school’s regular program.

But then she saw the classes. “They are completely segregated,â€ Adeyela says. “The regular classes are all black with a few brown-skinned Hispanic children.â€ The gifted classes are nearly all white. That was when she decided to pursue the program for her daughters.

The Bennetts paid $600 to have their daughters tested privately (because the school insisted that the process was long, the principal suggested that they test their daughters privately). Although there are a variety of tests that can be used to evaluate for giftedness, the psychologist that had been recommended to them used the Reynolds Intellectual Assessment Scale–which is considered culturally inappropriate for assessing black children or children from overseas. The Bennett twins are black and have lived most of their lives abroad.

The twins’ teacher, as part of the assessment, gave the girls a score of 0 for creativity–an astounding score for any child, but the Bennett girls in particular are both avid readers who write their own stories and perform their own science experiments. They are gifted in the visual arts and love science. The absurd score set off alarm bells for the Bennetts and caused them to question all the test results.

Adeyela Bennett was so shocked when she saw the flagrant, obvious racial segregation in the school, she wrote an article that was published in the Miami Herald.