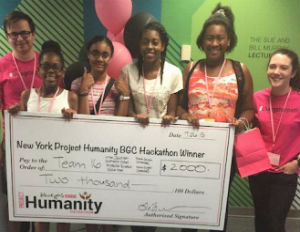 On Jul 24 in New York City, N’Dea Jackson, Adia-Simone Rhoden, Marissa Rivera and Autumn Noel, participated in a Black Girls Code Hackathon and won $2,000 for designing Mana,Â an app that lets students host virtual study sessions,Â catch up on notes and homework missed after being absent, and work with study tools like flashcards and built-in break-time reminders, MTV news reports.

During the Black Girls Code Hackathon, a three-day event for girls ages 12-17, sixteen teams of girls were given an assignment to create an app related toÂ  “project humanityâ€ and “social justice.â€ While the first place winners focused on an app to support their studies, the second-place winners developed an inspirational app to support students who have been bullied.

“We went through lots of ideas and everyone suggested some,â€ said 14-year-old Philadelphia native N’Dea Jackson to MTV News. “I suggested education because my dad works in that field so I knew more about that topic than the other ones. We thought some of the other topics available, like bullying and the environment, would be popular, and we wanted to stand out.â€

“I love how [with coding] you can build whatever you want, and there are no limitations because you have all the controls,â€Jackson said. “I’m fascinated by how apps work and by learning how to make them function properly.â€

Although Mana only exists in a “demoâ€ version, the girls are “on the lookout for a company that might want to help them turn it into a fully functional app.â€

In 2011, Kimberly Bryant founded Black Girls Code, to introduce basic computer programming and coding skills to girls of color in grades 6-12. The organization started in San Francisco, CA and quickly expanded to a chapter-based program including summer camps, after-school programs, and community-based workshops across the country. “We want to reach a million girls by the year 2040 and introduce them to coding,â€ Bryant told MTV News. “We have a long way to go, but we’re starting to expand internationally.â€ There’s already a chapter of Black Girls Code in Johannesburg, South Africa, and Bryant said they hope to expand to more places in Africa, Latin America, the Caribbean, Europe, and Canada.