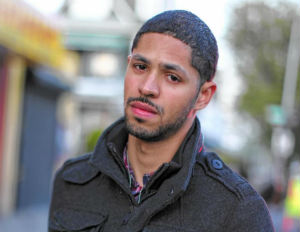 Michael J. Feeney, a leading young journalist who worked as a Daily News reporter and served as president of the New York Association of Black Journalists, died Sunday of complications from a staph infection in his kidneys. He was 32.

According to the Daily News, Feeney’s mother, Reba Willis, said the young journalist was about to begin a new post as entertainment reporter at CNN in Atlanta when he fell ill. His cousin posted a message via his Twitter page to inform his more than 4,000 followers of his death.

This is Dawn, Michael’s cousin. It is with profound sadness that I inform you my cousin passed away today. Follow on FB for arrangements.

“Mike did everything to help everyone,â€ his mother told the Daily News Sunday. “He did whatever he could with any person who he came across who wanted to know anything about journalism and about life.â€

Feeney had been in Holy Name Medical Center in Teaneck, N.J., since Tuesday, she said. He went into cardiac arrest at 1:15 p.m.

[WATCH: ‘Making a Mark in the World: Michael Feeney’ via Blake Campbell/YouTube]

His death shocked those who knew him—from media colleagues to community and political leaders. Feeney, who graduated from Delaware State University in 2005, had a stellar resume of working with top media companies and telling stories of everyday people and celebrities alike. In addition to the Daily News, he worked for the Associated Press and, later, The Record in New Jersey. A Teaneck-native, he was named the emerging journalist of the year by the National Association of Black Journalists (NABJ) in 2010 and in 2011, and he was elected to serve the organization as New York chapter president.

My condolences to the friends and family of @mfeeney.

Our bodies leave, our spirits stay, and our achievements get to be celebrated eternally… RIP #MichaelFeeney, former @NYDailyNews reporter.

Feeney has also written freelance pieces for EBONY.com, TheGrio.com, and covered the unrest in Baltimore, Maryland, in 2015 for NBC BLK. He was a staunch advocate and activist for diversity in the media industry, as well as societal issues of equality and discrimination against people of color.

“Michael was a great journalist and an even greater person,â€ current NYABJ president Julie Walker toldÂ JETMag.com. “He worked tirelessly to further the goals of NYABJ and to revitalize the chapter.”

Walker’s sentiments are evident in Feeney’s work with the organization and his public support of black journalists and their advancement.

“I’m standing here as an example that NABJ does work and NABJ is relevant. We need NABJ. NABJ has helped me so much and I’m so grateful,”Â he said in a 2010 speechÂ accepting his NABJ award. “To the young journalists, don’t give up.Â I’m living my dream right now, and I hope one day you guys can live your dreams as well.”

In addition to his mother, Feeney is survived by a sister, Maria Feeney, a twin brother, Anthony Feeney, a niece, and a nephew.

“It’s going to be a hard pill to swallow for everyone,â€ his mother told the Daily News. “He had so much more to accomplish. He is truly going to be missed.â€

Funeral arrangements are pending and a memorial fund has reportedly been started in honor of his legacy.