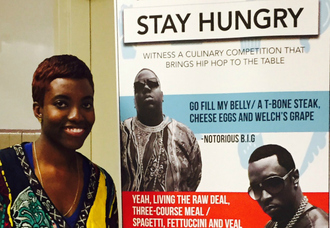 Driven by a passion for hip-hop and food, Syreeta Gates is blazing a new trail in the world of social entrepreneurship. As the founder of The Gates PreserveÂ and dream director with The Future Project, she’s partnered with chef Elle Simone of SheChef and gained support from entertainment mogul Sean “Diddy” Combs to bring the 2nd annual Stay Hungry exhibition to Brooklyn, N.Y. on May 21.

Stay Hungry, an unconventional culinary competition, will give six NYC schools an opportunity to compete by preparing dishes illustrated in select hip-hop lyrics. Black Enterprise caught up with Gates to learn how she attracted the attention of influencers for her passion project.

Why did you start Stay Hungry?

Stay Hungry started as a personal project of mine. I’ve always been passionate about food. I remember my Aunt Dorothy getting a lot of love for baking 7 Up cakes. I used to cook at home and later applied and got accepted to culinary arts colleges. I’m also extremely passionate about hip-hop. When I Googled hip-hop and food, the only thing that came up were articles listing hip-hop lyrics about food. So, I figured, let me build a team and do something around that. In 2015, Stay Hungry, a competition that bridges hip-hop and food, was born.

What motivates you to keep it going?

I’m committed to innovation in hip-hop culture. To say I love this culture would be an understatement, but I want to push hip-hop culture further. To do that, I have to create work supporting that. The projects under The Gates Preserve are Stay Hungry, a culinary competition that bridges hip-hop and food; Word IS Bond, a documentary about hip-hop journalists and the impact they have made on the culture, and I have an upcoming book.

How were you able to attract the attention of Sean “Diddy” Combs?

He supports the work of The Future Project. Last year, his team attended our Stay Hungry event. Because they support the work that Stay Hungry does, he donated to make it a reality.

You also have an impressive roster of judges lined up, including Jarobi, chef and member of A Tribe Called Quest; JR Robinson, founder of Kitchen Cray;Â Miriam Osei,Â owner of BCakeNY;Â and Dale Talde, chef and owner of Pork Slope.Â Can you share some tips for attracting influencers and establishing successful business partnerships?

Follow Stay Hungry @yostayhungryÂ on FacebookÂ Â and Instagram.Â To reserve your spot at the Stay Hungry event, visitÂ https://stayhungry.splashthat.com.