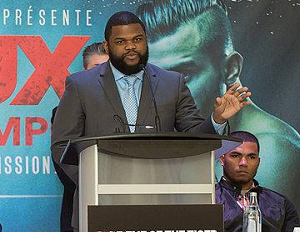 After fighting as an amateur boxer in college, Adrian Clark quickly realized that he had another calling. “I got stopped by a guy who ended up going pro a few years later and he literally knocked me into the business side of boxing,” jokes Clark.

He got his first taste of sports management after graduating from Texas A&M University-Corpus Christi when he moved to Utah to work for his friend, NBA player CJ Miles. Now, as the CEO of AC Sports Management, LLC, Clark is making waves in the industry as a respectable manager, entrepreneur and author of i: A Guide For Young Entrepreneurs.

BlackEnterprise.com: How is AC Sports Management, LLC different from other sports management companies?

Clark: Just being able to relate to people and do things the right way. In boxing people try to get over on you with money. I think sitting down with the boxers they know. I’ve been through what they’ve been through as an amateur boxer [and] they really like that.

What has been your key to attracting new clients?

When first starting out, I would email any and everybody, no matter what promotion company they were with, just to let them know who I represented and what my company was. Of course a lot of people didn’t respond, but at least they were getting to know my name. I always looked at myself as a salesman, so my ability to sell has been the reason why my guys have gotten opportunities all over many different networks.

What’s been your most lucrative fight?

When James de la Rosa fought Hugo Centeno on HBO in 2014. Financially, that was the biggest deal I negotiated. He also opened up the Showtime pay-per-view telecast when Floyd Mayweather fought Marcos Maidana. It was the rematch and we opened up against a guy name Alfredo Anguloon on Sept. 13, 2014. It was a six figure deal.

Talk about the new agreement you introduced that will change the way boxing deals are done.

Right now, boxers don’t understand that their name is their company and they are the owners of that company. The problem is that fighters are signing contracts under managers and don’t have their own contracts. If a manager stops working for you, you don’t get to fight. That’s why a lot of guys now in the industry are not fighting and making money because an individual that works for them is saying I’m going to focus on my other clients. So what I’ve done is come up with the AC Boxer-Manager Agreement, and in this agreement the boxer is contracting the manager. If the manager is not doing their job, then the fighter can give the manager 15 days notice that they’re not going to need their services.