YouTube Encourages Users to Use Real Name When Commenting 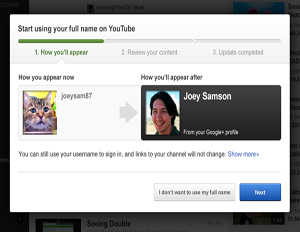 We’ve all seen them. Whether you’re viewing a helpful how-to video or a music video for a Top 40 hit, the remarks left behind in YouTube’s comments section can be vicious. Â Hidden behind an alias, commentaters can remain anonymous while sounding off. However, that’s about to change with YouTube’s revamped commenting system options.

YouTube is encouraging users to swap their pen names with their full names when they comment or upload a video. The video-sharing site will ask if it can begin displaying the name and photo linked to your Google+ account. Â (That is, if you have a Google + account.) “We’re giving you the ability to change how you appear on YouTube, with the option to use your Google+ profile on your YouTube channel,â€ the company mentioned on its blog. “One Google-wide identity was something that proved popular with new YouTube users when we began offering it in March, so we are now extending it to existing users.â€

If you refuse, Google forces you to select a valid reason, like “My channel name is well-known for other reasons,â€ according to tech-news site BetaBeat. While “I want to remain anonymousâ€ may seem like an appropriate response to include in its selections, it was left out.

YouTube users will also be able to review their past activity.

While the company’s sole reason for implementing the change in commenting options is not to reduce the amount of inappropriate commentary, it’s a likely outcome.

Do you think YouTube’s new commenting policy will discourage people from leaving harmful remarks on the platform? Let us know what you think in our comments section below.