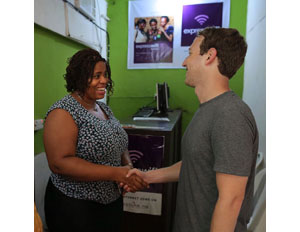 Mark Zuckerberg has made his first visit to Sub-Saharan Africa. He is currently in Lagos, Nigeria, where he is on a whirlwind tour meeting developers and entrepreneurs.

At a town hall meeting that was also broadcast via Facebook Live, Zuckerberg said that, in his plan to travel to different cities around the world, “I wanted to come to Lagos first, because of the vibrant developers and entrepreneurial ecosystem.â€

Nigeria is Facebook’s largest market on the African continent. At the town hall, he said, “There is this energy here; you feel it as soon as you get off the plane.â€

The Facebook founder also told the audience of developers and entrepreneurs that they were not just influential in reshaping Nigeria, but also in the continent and the “whole world.â€

“That’s a story that’s underappreciated in other parts of the world,â€ he said.

Zuckerberg also offered insight into owning a successful company, such as Facebook, and his thoughts on the future of tech. He said managing a company is not much different than writing code and being an engineer. “Engineering comes down to two principles–you think of every problem as a system, and you breakdown problems from the biggest stage into smaller problems that you can then solve.â€

The Future of Tech: Less Stuff

Zuckerberg also took the time to meet with entrepreneurs around Lagos, such as Rosemary Njoku, who sells Wi-Fi services powered by Facebook to local entrepreneurs.

“I was told to not compare the jollof rice with that of neighboring countries,â€ he said, to the amusement of the audience.