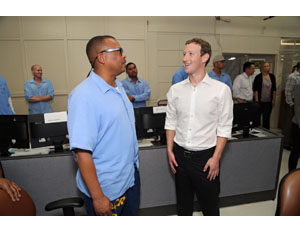 Facebook founder Mark Zuckerberg, wrote a lengthy post about the injustices that are pervasive throughout the U.S. penal system.

The post was written after Zuckerberg and his wife, Priscilla Chan, visited San Quentin State Prison on Tuesday. He met with inmates who were taking classes in programming. “I was impressed by their spirit to return to their communities and provide for their families,” he wrote about the inmates.

Zuckerberg cited troubling statistics in his post that currently reflect the state of the U.S. prison system. There are about 2.4 million people currently incarcerated, which means that over a quarter of the world’s prison population is in United States’ penitentiaries. Almost 40% of prisoners are black. More than half of those entering prisons live below the poverty line.

He also noted that “blacks and Hispanics are significantly more likely than whites to be arrested for possession and sale of marijuana and to receive a conviction and criminal record, even though the majority of marijuana users are non-Hispanic whites.”

His motivation for visiting San Quentin was inspired by reading the book, The New Jim Crow: Mass Incarceration in the Age of Colorblindness. Written by Michelle Alexander, a civil rights litigator and legal scholar, the book is described by Benjamin Todd Jealous, former president and CEO of the NAACP as, “a timely and original framework for understanding mass incarceration, its roots to Jim Crow, our modern caste system, and what must be done to eliminate it.”

Zuckerberg wrote that the book made him “want to see firsthand what prison conditions are like for people.” The visit and book both led Zuckerberg to conclude in his post, “Making our criminal justice system fairer and more effective is a huge challenge for our country. I’m going to keep learning about this topic, but some things are already clear. We can’t jail our way to a just society, and our current system isn’t working.”