Zuri Hall Talks Landing Her Dream Job at E! News and the Power of Investing in Yourself 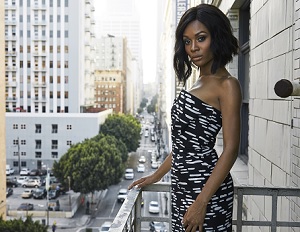 Recently named one of E! News newest correspondents, Zuri Hall’s career journey is a prime example of how investing in your dream is one the greatest personal gifts you will ever receive.

After graduating from Ohio State University in 2010, Hall auditioned to become the next face of a local television station in Indianapolis, where she competed against hundreds of other aspiring television hosts, and won.

From there, the Emmy winning journalist went on to work at local television stations in Ohio, and Texas, before finding her way to the ‘city of bright lights.’ In 2013, she became the co-host of the music countdown show Trending 10 on Fuse TV in New York. Afterwards, she moved on to serve as a host for various network specials on MTV before joining the E! News family in July 2015.

[RELATED: Cool Jobs: Hot 97â€²s TT Torrez on Beating the Odds to Be a Power Woman in Radio]

With her inspiring #AlphaBabe blog taking off and her more than 65,000 loyal YouTube subscribers by her side, 27-year-old Hall opens up to BlackEnterprise.com about her journey to E! News and the power of believing in yourself.

BlackEnterprise.com: How did you get your start in television?

Hall: I always knew I wanted to be in television and/or film. Entertainment was my passion and I knew that I wanted to be a part of the industry in some way and preferably on air. I got my first job in television just a month or two before I was going to graduate from The Ohio State University. I stumbled into this online posting that said ‘Do you want to be the next face of MyINDY-TV?’ So I did some research and found out that it was the smaller sister station of the PBS affiliate in Indianapolis. I talked to my boss at my on-campus job and she gave me the day off. So I hopped in my car the next day and drove three hours to Indianapolis from Columbus, and there were a few hundred people who ended up competing. Everyone was mostly from Indianapolis and they were looking at me like, ‘what is this girl doing? It’s not that serious to come from Ohio.’ But for me it was because I needed a job. So I auditioned for all of 10 minutes and then drove back to Columbus and just hoped for the best. I made the top five, and then it was announced live on their local lifestyle show that I had won the competition.

A year after graduating college you won your first Emmy. How did that come about and what project was it for?

That was for my work as the face of MyINDY-TV. So it was a regional Emmy and it was a prime example of just believing in yourself and thinking you deserve some sort of nomination or recognition. I don’t think a lot of people realize it’s one of those things you have to pay for to even be considered for nomination, and just because you pay doesn’t mean you will be nominated and you will not get your money back. So even though I was young and new to the industry and money was not something I had a lot of, I decided to invest in myself and put that money up to see if they thought my work was worthy of a nomination, and the academy did. My peers decided I was worthy of the nomination and then we went to the awards ceremony and they called my name and I couldn’t believe [it]. At that point I was doing local news for one year, if that, and that was sort of my first major lesson on believing in myself and taking that chance when no one else would. If you don’t bet on yourself, who will?

Fast-forward to today and you’re the new correspondent for E! News. How did this opportunity come about?

Yes, E! News has been a long time in the making for me honestly. Everyone thinks it happened overnight, but it was so not like that. Actually, the first time I ever met with E! News was a few years ago. I came [to Los Angeles] and slept on a friend’s floor because I couldn’t afford a hotel. I took the bus to my meeting and it was just a general meeting. It wasn’t like a ‘we have a job for you.’ It was just like, ‘hey, we’re happy to meet you and put a face to a name.’ So I took the bus down there to meet with them and they were really nice and we hit it off and that was that. I went back to the Midwest and that really just fueled my fire to get back there and have a meeting that would lead to something major. So I worked in the local news market for a few years, and then just this past year we got back to talking and exploring and one thing just led to another. I have an amazing agent, amazing lawyer, and the team that I have surrounded myself with is so young and ambitious and hungry too. So they really helped to connect that for me. But as far as specifics, I came in, we talked and it felt right and we decided now is the time to make it happen.

With thousands of social media followers and a thriving blog, how have you been able to use the Internet to elevate your brand?

I love the Internet. It has been my greatest tool because when other people wouldn’t give me the power or the platform to let my voice be heard, the Internet did. I love the YouTube community and I’m so passionate about it. I decided to get on YouTube a couple of years ago, not as my bread and butter, but I just wanted an opportunity to have a direct connection to my fans and supporters. So I got on and the more videos I made, the more I fell in love with it because I realized I was being my truest self online and my supporters and subscribers responded to that. They’re getting who I am off-camera and slowly, but surely, those two sides have collided. My YouTube family has helped me hone my hosting voice, and I’ve been able to fuse the two so that no matter where you go now: Zuri Hall is Zuri Hall. I’ve been able to let that shine.

When it comes to my blog, the #AlphaBabe movement is really about inspiring and encouraging young ambitious women. So not just saying ‘you can do it,’ but giving them the tools to show them how to do it. Being an #AlphaBabe is someone who is strong and smart and sexy. We don’t mind dressing up and playing in makeup and being beautiful because we are all those things, but there is intelligence and brains and opinion and a strong voice behind that too. So we’re not any one thing. We are a lot of things. So for me it’s about getting that hashtag out there and [a] social media movement going. I have a lot of plans for seminars and workshops and speaking tours. It’s just so much that I want to do with the movement.

What advice do you have for someone who wants to get into television, but has no clue how to break into the industry?

Go to ZuriHall.com and check out the #AlphaBabe blog because a lot of stuff that I say there are honestly the steps I have taken. I have a blog post talking about tips for an aspiring TV host. One of my biggest things, especially in this day and age, is to always encourage aspiring talent to create their own content. The way you stand out is [by] bringing your own fresh perspective. We all have these various backgrounds, so all of our opinions are formed by different struggles; take that and own it and sharpen your craft. That way when you walk into a room with these big executives, they think you have a voice that people want to hear.

To learn more about Zuri Hall and stay up-to-date with her latest musings, visit her site at ZuriHall.comÂ andÂ check out her YouTube channel at HeyZuriHall. Also,Â follow her on Twitter and Instagram at @ZuriHall.