$1.9B Potentially Lost To March Madness at Work 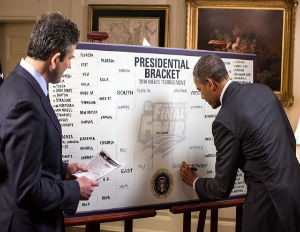 Picking teams and waging bets on who will win in March Madness is estimated to cost the American workforce nearly $2 billion. Â Employees at all levels from the country’s chief executive to rank-and-file private sector employees are expected to get in on the frenzy of picking a winning team during the NCAA mens’ basketball tournament.

The White House made President Barack Obama‘s tournament bracket public in 2014, noting that this was an annual tradition for the six years he had been in office. Â In addition to President Obama, Challenger, Gray & Christmas estimates that more than 60 million Americans take valuable time away from their workday to participate in March Madness.

“It is an annual tradition that has become woven into the fabric the American workplace and society at large. However, there is a cost in terms of lost wages paid to distracted and unproductive workers, and, this year, the cost could reach as high as $1.9 billion,â€ stated global outplacement firm Challenger, Gray & Christmas, Inc. in a press release.

March Madness officially begins on March 19 when the 2015 NCAA tournament begins in Las Vegas, but workers across the country are expected to begin working on their brackets as early as March 16. “That is when workers across the country begin clogging the company internet with efforts to craft a winning bracket for their workplace and non-workplace betting pools,â€ according to Challenger.