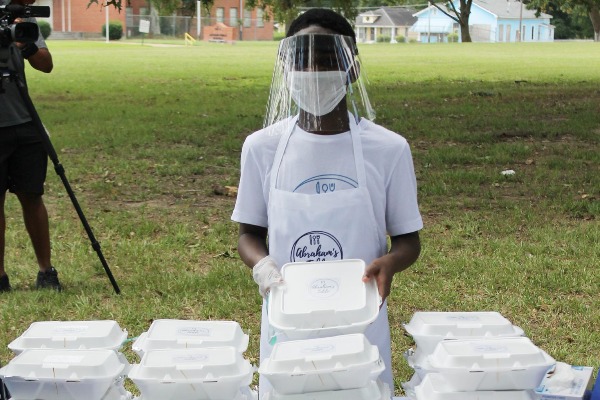 Instead of asking for a gaming console or a trip to Disney World, 13-year-old Adeola ‘”Abraham” Olagbegi used his Make-A-Wish opportunity to give back to others who are also in need.

After being selected by Make-A-Wish in Mississippi, Abraham decided to use his wish to feed the homeless in the city of Jackson for the next year.

“I am a person of hope, so when you come against a big mountain, you have to remember you have a big God,” Abraham told WLBT.

Abraham and his family had already been feeding the homeless every month prior to him being diagnosed with aplastic anemia in June 2020. The rare and life-threatening blood disorder is a type of bone marrow failure that makes it impossible to produce enough blood cells to support the body, CNN reported.

Make-A-Wish grants wishes to children and teens ages 2-18 battling critical illnesses. But with Abraham being brought up in a strong faith, he isn’t letting his sickness stop him from paying it forward.

The teen has been focused on continuing his family tradition of feeding the homeless inside Jackson’s Poindexter Park throughout the next year. It’s something that he knows will bring him joy in this life and the next.

“It is just a blessing to see people getting fed. When I leave, I am going to feel joyful,” Abraham said.

Giving back is what he’s been raised to do and it only felt natural to extend his opportunity to others in need instead of selecting a wish that would have only benefitted him.

“It was always a good thing to do, and that’s what I grew up doing that,” Abraham said. “So, I go back to my roots to do what I was taught to do.”

Make A Wish is also happy to serve its mission and pay it forward in more ways than one.

“We were excited this is our first philanthropic wish in our 20-plus years of the chapter in the state—a huge milestone for us, but also this is the first meal that Abraham is able to serve,” said Linda Sermons of Make-A-Wish Mississippi.