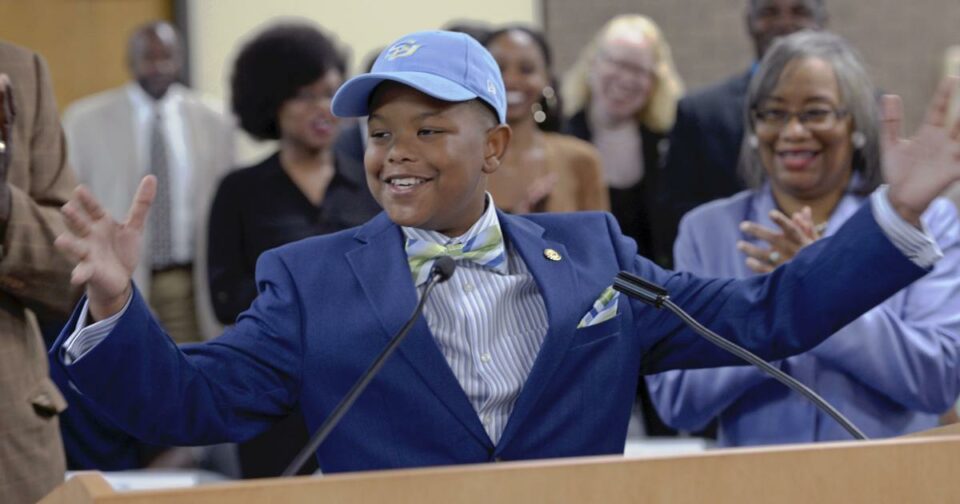 Elijah Precciely, at lectern, talks about how excited he is of becoming a Southern University student at the Board of Supervisors meeting. Image Credit: ADVOCATE STAFF PHOTO BY BILL FEIG

Elijah Precciely of Baton Rouge is the youngest full-ride scholarship recipient Southern University has ever signed.

At just 14 years old, this child prodigy is striving to learn all he can while preparing for his last few semesters at the HBCU.

The celebrated boy genius, who is currently a junior at Southern, was home-schooled by his mother while taking college-level courses in biology, physics, and business at just 8 years old, according to WAFB.

By 11, he had earned a spot in Southern University’s Honors College and began his career as a full-time student in the 2019 spring semester. He was even bestowed with a J.S. Clark Presidential Scholar Award.

A double major in physics and chemical engineering, Precciely’s pursuits transcend his academic career. He’s hosted a weekly radio show and been featured in various national outlets, including a Cartoon Network special. He is a published author of two books, A Prodigy, My Secrets (2021), and Mission Christian: God’s Got Firsts! Coloring Book Edition: Coloring Book Edition (2018).

Additionally, while breaking records and making history, the teenager is an inventor at heart. He has already applied for more than five patents for his inventions. As he rises to the occasion, Precciely is more focused on “changing lives.”

“I don’t look for just breaking records; I look for changing lives. And in that, I will break records,” he said, according to WBRZ.

“My first priority is to be a shining light to help others, and the second priority is to make sure that I help people like me and people who want to connect with me.”

“You’ll have many Black and brown children to see someone who looks like them and does not have to cater to other institutions that are traditionally known for geniuses,” added his father, Pastor Steven Precciely.

“There is a greatness right here at an HBCU. There’s greatness here, and you can shine and you can get a great education here and encourage them to do likewise.”

At only 14, Precciely anticipates graduating in May 2023.