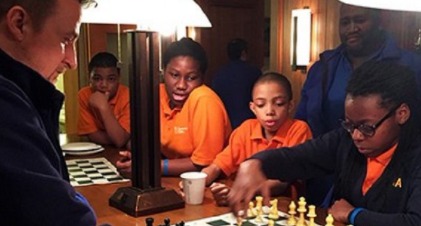 In 2020, 15-year-old New Yorker Jessica Hyatt—who happens to be one of the top 10 Black female chess players in the country—earned a $40,000 Daniel Feinberg Success in Chess Award. At that time, CBS New York said that a $40,000 college scholarship accompanied the honor. Hyatt is on track to achieve her history-making goal of becoming the first African American female chess master.

A few months ago, Disney Channel’s In the Nook interviewed Hyatt who explained that at the age of four, although she was not into games as a young child, she was on her computer and discovered a chess game. Nevertheless, it gained her attention. She attends a high school known for chess said that the queen is her favorite chess piece because it is the most powerful one on the board.

Hyatt is inching closer to her goal of becoming a chess master. She spoke about the rating that is measured by skill.

“Currently mine is 2,000. In order to become a chess master, you have to reach the rating of 2,200 and that will put you in the top 1% of people in the Nation,” Jessica said to In the Nook.

In the CBS interview in 2020, her rating was reportedly 1,950, so Jessica is still making progress toward achieving her big goal. During the interview, Jessica shared advice for youth who may be afraid to try new things.

“The biggest opponent is yourself, and you should take each moment to learn about you and to try new things, and see your improvement,” Jessica said, during the In the Nook interview.

BK Reader previously reported that the teenager who loves chess plays even in her free time.

“When I wake up, during my breaks I play it, during my lunch, I play it — maybe 6 to 7 hours per day I play,” Hyatt said to BK Reader.