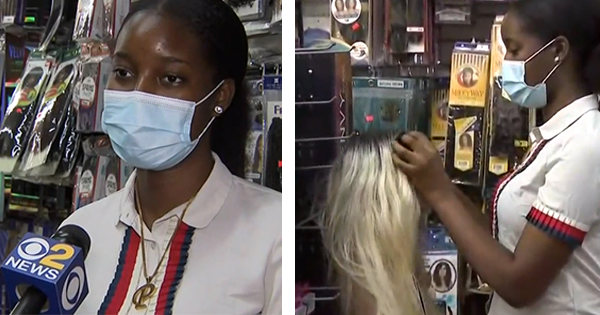 At the age of 16, Paris McKenzie has opened her own beauty supply shop called Paris Beauty Supplyz in Brooklyn, New York, making her the youngest person to ever do so. Already equipped with a lot of business experience, she has so far been running the business smoothly.

Over the years, Paris has been racking up knowledge in business while she was assisting her mother, Senica Thompson, in running her businesses, a boutique and a salon near where her new beauty supply shop is now located.

“I’ve been helping my mom run her business since I was very, very young. So I know how to handle finances and how to market products in the store,” Paris told CBS News. “I had enough money saved to invest in this.”

Despite her young age, she also earned the respect of her relatively older staff including 22-year old Giselle Ashby who said, “Paris, she’s like a little sister to me. I respect her. It’s fun.”

Aside from being an entrepreneur, Paris, who is a straight-A student, also plans to major in pre-med to achieve her dream of being an orthopedic pediatric surgeon. She is an incoming junior year high school student and is already taking college courses. She is a busy teenager but she doesn’t forget to enjoy from time to time.

“I don’t really have any more free time, but when I do, I try to go out with my friends,” said Paris. “Walking in here every morning, it makes me feel awesome.”