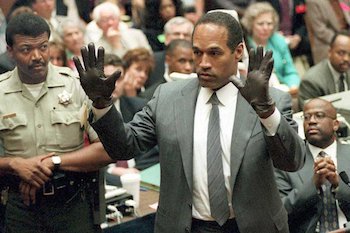 Today marks the 20th anniversary of the murders of Nicole Brown Simpson and her friend Ronald Goldman. If you’re not feeling too old then today’s Throwback Thursday is pegged to social media remembering this moment in American history.

Dubbed the “Trial of the Century” by the media, Orenthal James Simpson became infamous over the course of 265 days. Led by a team of lawyers, a prosecution that was looking for blood, and a rotating cast of witnesses who had their own agenda, the O.J. Simpson trial played out like a real-life soap opera, equipped with cheesy one-liners (“If the glove don’t fit, you must acquit.”) and weird subplots (Mark Fuhrman anyone?!).

For those of you who remember where you were when the white Bronco raced through out television screens, sit down and brace yourself as Twitter remembers the O.J. Simpson trial.