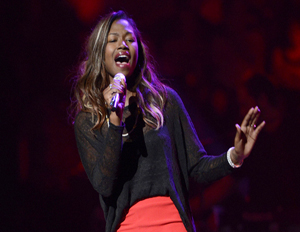 We all know girls rock, and the best of best include five women who have wowed ‘American Idol’ judges and audiences to reach to the top 10. If one of these songstresses wins the ultimate title, she will be the first female to break the all-male winning streak. (No woman has won since Season 6’s Jordin Sparks—who also made history in 2006 as the youngest winner. If two in particular triumph they’d make dual history, becoming the first black female ‘Idol’ since Sparks.)

As we celebrate Women’s History Month, let’s take a look at the groundbreaking females who’ve become ‘Idol’ who’s who:

This contestant counts Whitney Houston and Celine Dion as musical inspirations, and reached the final 10 with no formal musical training. On March 6, her rendition of Houston’s “I Believe in You and Me” helped her land in this week’s top 10. She comes to this who’s who group of talent after initial rejection, having first auditioned for American Idol last season and making it all the way to Las Vegas before being cut.

This Southern songstress has a personal style influenced by Vince Gill and Eva Cassidy, and was the first female to be announced as a finalist in this season’s top 10. Arthur’s said to be a personal favorite of judge Nicki Minaj, and performed “Home” after finding out she’s among the best of the best.

Noting soulful R&B singer Jasmine Sullivan as a musical influence, Glover’s last week performance of John Legend’s “Ordinary People” was called “unbelievable” by judge Randy Jackson. “ We all love you!” he continued. “We stood up. Congratulations!â€ She’s previously auditioned for Seasons 9, 10, and 11, showing with a little practice and persistence, one can realize their dreams.

Hailing from country music’s capital, Harrison’s inspired by legendary crooner Patsy Cline. One of her fondest early music memories is singing with award-winning rock band, the Doobie Brothers, and she’s somewhat of an industry vet, having made several appearances on “The Rosie O’Donnell Show” and being briefly signed to Lyric Street Records— all by age 10.

With Beyonce and Jessie J as musical influences, this New England resident’s riveting rendition of “You Set Me Free” landed her on the ‘Idol’ stages. Her performances have created quite the buzz, with video of her singing attracting more than 2 million views and a Twitter account boasting 40,000 followers after only being live for less than a month.