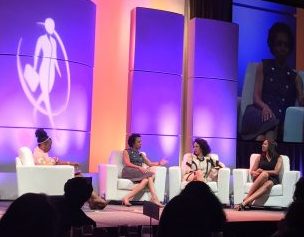 Day two of the Black Enterprise 2017 Women of Power Summit was filled with even more excitement, enlightening panel discussions, and empowering seminars.

Attendees began the day with either a rhythm rumble workout or yoga, before heading to breakfast. Black Enterprise CEO Earl “Butch” Graves, Jr. then kicked off the day-long sessions with opening remarks about the power of sisterhood.

“Leverage the secret power of sisterhood by surrounding yourself with the people, conversations, and networks that align with your personal goals, and will leave you with the critical tools you need to strengthen your finances, build your brand, manage transitions, take risks, connect–and yes–win,” he said.

Hosted by ADP, the first panel of the day featured a candid conversation between Ursula Burns, the first black woman to be named CEO of a fortune 500 company, and Ann Fudge, former chairman and CEO of Young & Rubicam Brands. During their discussion, the two trailblazers opened up about the challenges they faced while climbing the corporate ladder. They also shared invaluable success strategies forÂ those who aspired to do the same.

Later on, a panel of three leading experts gave advice on the best practices women should apply when negotiating, during a panel titledÂ You Deserve It: Get Paid What You’re Worth. “Negotiating is a skill that needs to be practiced and developed,” explained panelist, Dr. Ashleigh Rosette.

In addition to having the choice to attend multiple panel discussions, attendees were treated with complimentary one-on-one financial coaching sessions,Â hosted by Merrill Lynch and Bank of America.

During the special luncheon, sponsored by Disney, Graves handed awards to the women featured in Black Enterprise’s Most of Powerful Women in Business issue. He also made the surprise announcement that next year’s Women of Power Summit will be held at a Walt Disney resort in Florida.

Last but not least, the night ended with AT&T’s fireside chat with New York Time‘s best-selling author Luvvie Ajayi, who enlightened the audience with her wit and wisdom.