20/20 Vision Forum: Create Your Own Job and Reinvent Yourself 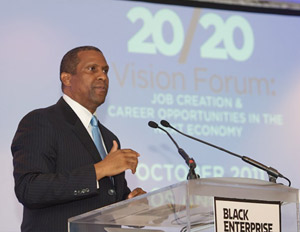 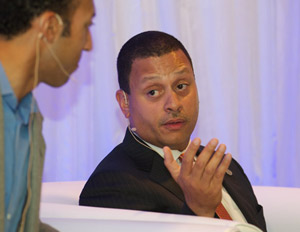 Blair Taylor during the 20/20 Vision Forum

Blair Taylor, president & CEO of Â the Los Angeles Urban League, spoke before an audience of roughly 300 business, government, non-profit and academic leaders, sharing his thoughts on building blocks for tomorrow’s workforce. He told them about taking a delegation of students from Crenshaw High School to China to observe commerce and culture within the superpower.Â  While in Beijing, the group visited one of the country’s top-ranked high schools, gaining an up-close view of its advanced level of instruction and dedication to academic excellence.

After the group completed the tour, Taylor said one Crenshaw student asserted: “We can do what they do. We just have to work harder.â€

That message, one of continuous skills upgrading fused with unyielding persistence, was delivered by participants of our 20/20 Vision Forum: Job Creation and Career Opportunities in the Next Economy, one of a series of such events presented by BLACK ENTERPRISE in partnership with Walmart. Â The LA event, like one held in Washington, DC in early 2010 and another in New York this past June, was designed to bring together the best minds to conjure up constructive options to put a dent in short-term unemployment and propel long-term career advancement for African Americans.

Of course, African Americans have suffered the hardest blows in this economy. The Black unemployment rate continues to hover around 16%, twice the rate of Whites. And we continue to witness a government solution to the jobs crisis paralyzed by political gridlock. As President Obama continues to push the American Jobs Act–first as an expansive $447 billion package and then as the first $35 billion “bite-sizedâ€ piece to employ teachers and first responders–has been blocked by Senate Republicans. Now, the President is planning to use executive action to move his program forward because “we can’t wait.â€

Keynote Speaker Tavis Smiley says that as individuals seek the path to employment and entrepreneurship to “define their mission.” He, however, took the opportunity to challenge the President on his vigilance to solve the jobs crisis.

Alicia Villarreal, Regional Representative for Labor Secretary Hilda Solis who provided the market outlook, says the president has “drawn a line in the sand”regarding the jobs act. Also, she says the Labor Department has a number of initiatives to expand opportunities including “one-stop career”operations like the Compton Worksource Center which can screen applicants and “serve as employment agencies for companies.”

Others seek remedies to not only address Black unemployment but expand ranks of high-ranking officials. For example, BET founder Robert Johnson, who owns three BE 100s companies, recently proposed what he calls the “RLJ Rule,â€ calling for the 1,000 largest publicly traded companies to voluntarily consider a more diverse pool of qualified candidates when filling top-level job vacancies and contracting suppliers. His proposal is similar to the NFL’s “Rooney Rule,â€ a 2003 directive mandating pro teams to consider minority candidates for senior positions.

To fill the power pipeline, Arnold Donald, president and CEO of the Executive Leadership Council, the pre-eminent organization of top-ranking African American corporate managers, Â announced last week a call to action for corporate America Â to increase the ranks of African Americans CEOs or C-Suiters by 500 and collective number of Black board members by 200 within the next five years.

Our event offered urgency for employment and advancement of large number of African American managers as well as rank-and-file. When it comes to near-term job creation, long-term career reinvention or development of the next generation of talent, our forum participants revealed three critical drivers: the competitive impact of globalization, application and connectivity of information technology, and entrepreneurial development. These issues become more pressing in an environment with an increasingly high VUCA rating–”volatility, unpredictability, complexity and ambiguityâ€–a concept framed in That Used To Be Us, the recently-released book authored by columnist Thomas L. Friedman and international affairs expert Michael Mandelbaum.Â  Despite such uncertainty, Johann Schleier-Smith, co-founder of Tagged, a social discovery site with more than 100 million users worldwide, says “there’s a huge risk for not doing anything.â€