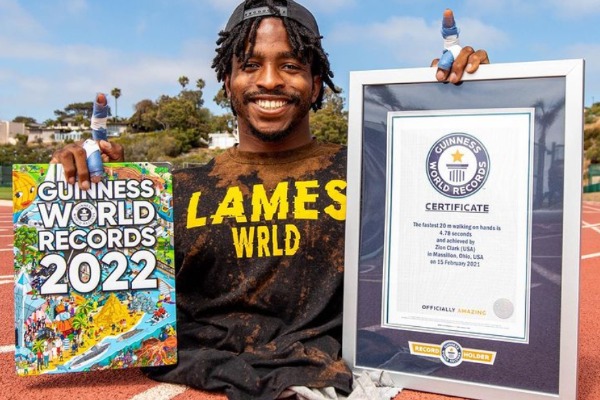 Zion Clark, 23, is using what makes him different to make history.

Earlier this year, he set a new Guinness World Record for the fastest 20m walk on hands with a time of 4.78 seconds.

Clark officially set the record back on Feb. 15, 2021, at his high school gym in Massillon, Ohio. His coach—Olympic Gold Medalist and Guinness World Record holder Butch Reynolds—trained Clark and helped him accomplish the feat in under five seconds.

“Before I knew it, I had crossed the finish line! A rush of euphoria surged through my body as the official timer called out 4.78 seconds!’ Clark told Vibe. “Everybody was excited, I was excited, my girlfriend was excited… it was just a moment man!”

Born with caudal regression syndrome, Clark grew up with abnormal development of the lower half of his body. But he didn’t let the physical setback stop him.

“In my case, my birth mother did not take care of her body at all while she was pregnant with me. She was on a multitude of different drugs, and that caused me to have defects,” Clark said. “It made my life harder from the get-go because I had to go through two different surgeries for my back, just so I could sit up straight.”

Clark took to Instagram last week to share the big news and tease his plans to set a new world record.

“As the fastest human on two hands for 20m. This is a big accomplishment for me. I am one of the main features in the 2021 edition, so make sure you get your copy of it,” Clark captioned a photo holding his certificate and copy of the 2022 Guinness World Records.

“I am getting ready to set my next Guinness World Record what do you guys think it is?”

Congrats to Clark for this achievement.