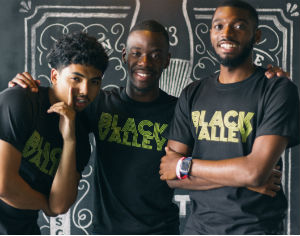 Lusenii, a class of 2016 graduate, was headed to Adobe as a web development intern. Paul, also a web developer and graduating senior, had landed an internship at Apple. As newly minted HBCU graduates, they were excited to move out to the Bay Area to get started. Both black, they were also already tired of hearing about the lack of racial diversity at tech companies (being a “unicornâ€ gets old fast).

Their conversations sparked a question, “Is there a group or a quick way for black tech interns to connect in Silicon Valley?â€

When they couldn’t find the network they were envisioning, they created a chat on the mobile messaging app GroupMe—a community for black interns working at Silicon Valley technology companies to be able to share professional and academic resources and meet up in person. They whipped up a logo on Photoshop and named the group “Black Valley”. Within a couple of days, they’d virtually united 30 people.

Once they arrived in San Francisco, they looped in Morehouse College class of 2017 physics major Dakari Franklin—Paul’s roommate and a fellow Apple HBCU Scholar. From there, friends of friends were conversing in the group and inviting other interns they knew or met on the job to join, too.

By the end of the summer, the Black Valley GroupMe had ballooned to more than 540 black interns from Apple, Facebook, Google, Intel, Uber, and a host of other leading tech companies and startups.

“It’s amazing to see such diversity, charisma, and intelligence in one group that the world systematically tries to discredit,â€ says Jazmin, who interned at IBM. “It was magical.â€

Read moreÂ at The Well…

Jopwell helps America’s leading companies connect with and recruit Black, Latino/Hispanic, and Native American professionals and students at scale. SignÂ up to find your dream job.