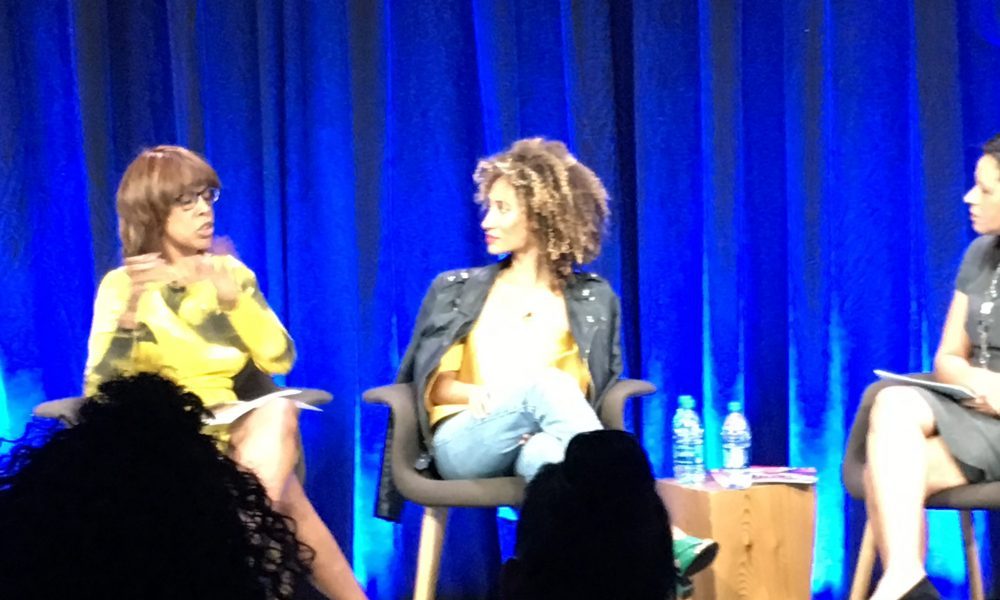 I recently had the opportunity to attend Google’s News Lab event for black media professionals at its New York offices. In addition to eye opening sessions that introduced and offered instruction on a set of digital tools, to produce more data-driven, dynamic content, those assembled also gained an exclusive; a compelling fireside chat with Bonita Stewart, VP, Global Partnerships, News & Broadcast at Google interview with Gayle King, co-anchor of CBS This Morning and Editor-at-Large for O, The Oprah Magazine and Elaine Welteroth, Editor-in-Chief of Teen Vogue, the youngest editor and second African American to run a title at CondÃ© Nast, the mammoth media empire.

It was a timely discussion about media, but it also shed light on how the lifestyles of millennials, the largest segment of our population, has not only transformed media, but also how all of us work, live, spend, save, invest, and play. From two distinct generations, King, 61, a devotee of Instagram and Twitter, and Welteroth, 33, a self-professed Snapchat fanatic, may differ in their embrace of technological platforms, but they do share some common characteristics, as both are brilliant, insightful, and witty.

The information provided via the discussion both confirmed and clarified how the world has changed in the “Digital Era.” This insight proved helpful to journalists, like me, who are trying to figure out how to best today’s media outlets. For you Luddites out there, the interview offered a direct, sobering message: evolve or perish.

Here were four valuable takeaways from the session:

Citing that 63% of news now comes from Twitter and Facebook, Stewart startedÂ the session by asking King and Welteroth how they believed these trends have changed the media environment.

Welteroth, who has been at Teen Vogue for four years, said, “It’s changed everything. When I first started, people approached social media as a nice thing to do–something fun to do. Now, it is a requirement to maintain your relevance. It’s not something I overthink in my own day-to-day life, but it is something that I can’t underestimate.â€ Although she found it exciting to see her work come to life on the pages of a magazine, Welteroth also found print to be a limited, one-way form of communication. With social media, she’s able to “break down that wall and have the two-way conversation, [which] holds you accountable in a different way. It allows you the opportunity to continue growing and learning about what is working, what’s resonating, and what’s not.â€

King maintained that, although she fully embraces the value of social media, “We have to be very careful. It is instantaneous. I know at CBS News, just because someone said it on Twitter, Instagram, or Snapchat, it doesn’t make it necessarily factual.â€

2. All Professionals Must Embrace New Technology—Even the Platforms Yet to Arrive

Stewart asked the two whether they were leaders in embracing media disruption.

“In 2016, I don’t think it’s very difficult to convince people that you have to be active in digital,â€ said King. Although the O readership is much older than that of Teen Vogue, she maintained that the audience wants to know what their children are doing, and that they also find the need to be more current.

King further emphasizes that use of mobile technology to share real time video, such as the fatal police shooting of Philando Castile past this summer, has become even more vital to the news gathering process. “[It] was live on Facebook Live. We saw this man lose his life, right before our very eyes,â€ King asserted. “That was certainly a game changer. That had never happened before, where you actually saw in real time, with his fiancÃ©e screaming the way that she did. Here, you see this man buckled with his seat belt, bleeding, and groaning. It was so instantaneous, that went from digital to mainstream very, very quickly.â€

She says that more tech-driven ideas are being developed by members of “the old guardâ€ at Hearst, the publisher of O, and other media companies, because “we all know that [tech is] here to stay. We know we have to get with the program, or we’ll be left behind.â€

3. Don’t Dismiss the Interests and Issues That Millennials and Generation Z Care AboutÂ

Welteroth said that her mission is to break the stereotype that her audience is “just so self-absorbed. They just want to take selfies all day.â€ Her wish is that each member of this generation be addressed as “a whole human being—someone who thinks about what is happening in the world and cares very deeply.â€

Welteroth added, “We have made a decision that our brand is going to be progressive. We are going to speak out on social injustices in real time. It’s interesting just to see that you can break the rules. You can talk about politics, social injustice, and wellness in the same conversation as fashion and beauty. No one’s going to call you out for that. It’s something that is incredibly important for us, as we move forward and rethink what Teen Vogue is going to be.â€

In fact, Welteroth and King believe that they can use their vehicles to bridge the generations. In fact, Oprah Winfrey has a group that she’s assembled called the “Super Soul 100,â€ which King describes as “a group of younger, innovative, creative thinkers. Our hope is we will align ourselves with them, and some of their followers will come to us and vice versa. We realize that it’s an important audience.â€

King cited that African Americans and millennials, among other groups, are not “monolithic communities.â€ She stated, “I think is important is that you must have a seat at the table, as people of color and leadership positions. I think that is so important, and I can’t stress that enough. People see that you’re on TV or you’re the Editor-in-Chief, but you’ve got to figure out a way to have a seat at the table. I say that because just having another voice at the table makes people think differently.â€

She used the fatal shooting of Travyon Martin by George Zimmerman in 2012, as an example. “When I heard the Trayvon Martin story, first of all, it was heartbreaking to me, as a mother of a son myself. I remember bringing it up at a meeting. I asked, ‘We’re not doing anything with that?’ The response was, ‘Well, no. There really isn’t anything there. It was an isolated thing.’ I said, ‘No, no, no, no, no. This may have been an isolated incident at this particular time, but what has happened to this kid is wrong.'”

As a result of King’s vigilance, that story evolved into coverage of the Black Lives Matter movement and a discussion of race that reverberates from communities and courts, to corporate boardrooms and campaign trails. Moreover, O–for the first time in its 16-year publishing history–will produce an entire issue devoted to race in America.

Welteroth, who used her role to organize a silent protest on social media after the death of Castile, agreed. “I think it’s important to recognize that we stand in the gap. We have the opportunity to bridge huge divide as people at the table and as thought leaders–especially for this generation.â€