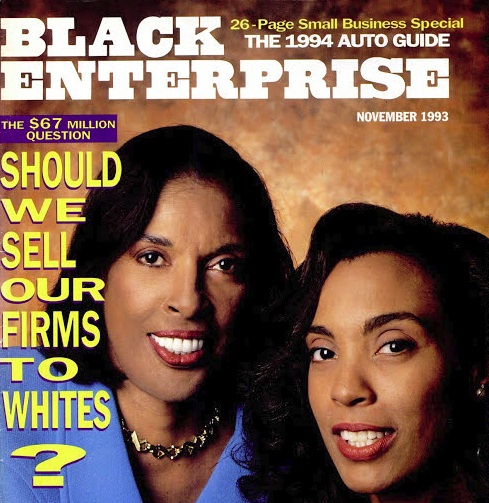 Today we reveal No. 18 in the web series “Great Moments in Black Business.”

1993: Johnson Products Co., the haircare company known for Ultra Sheen and Gentle Treatment, is acquired. The $67 million sale represents the first BE 100s haircare manufacturer bought by a majority company and begins a decadelong series of mergers and acquisitions that virtually wipes out African American ownership within the black haircare industry.

There was probably no sale of a black-owned company to a majority corporation that sparked more controversy than when Chicago-based haircare manufacturer Johnson Products Co., the maker of Afro Sheen, Ultra Sheen, Gentle Treatment, and other such grooming products for African Americans, was acquired by Ivax Corp., known at the time for the Flori Roberts cosmetics line targeted to black women. While Johnson Products chairman and CEO Joan B. Johnson hailed the transaction—a stock swap valued at $67 million—as a deal that “creates synergies for marketing opportunities with our haircare products,” the event unleashed fury in many quarters of Chicago’s black community.

Citing the haircare manufacturer’s 39-year-old roots as a major employer of African Americans and supporter of black causes, Mark Allen, then-president of the Black Leadership Development Institute, a local nonprofit training group, told BE at the time: “A lot of community leaders felt betrayed because we would we would have liked to check the resources in our own community first.” BLACK ENTERPRISE further reported that Jeanette C. Wilson, then-executive director of Chicago-based Operation PUSH, called for a boycott of IVAX, asserting at the end of the organization’s 1993 convention: “We object to the purchase and sale of Johnson Products to white-owned IVAX because the wreckage the acquisition would leave in our community in terms of the loss of jobs and to the decreased commitment to our economic empowerment.”

The loudest protester, in fact, was JPC founder George E. Johnson Sr., who lost the controlling interest to his ex as part of a 1989 divorce settlement. He told BE at the time: “You can’t tell me anything that can justify what is happening. From the time that deal is consummated, money made at Johnson Products will no longer remain in the black community.”

The sale of Johnson Products was significant on a number of levels. Since it was founded in 1954 by Johnson, a salesman, with a $250 vacation loan, JPC had developed a line of haircare, cosmetics, and fragrances and within 25 years controlled 30% to 40% of the black haircare market. As one of the first black-owned haircare companies, JPC “inspired and motivated other black entrepreneurs,” Ed Gardner, co-chairman of Soft Sheen Inc., Johnson Products’ competitor and a top-ranking firm in ethnic haircare, told the Chicago Tribune.

The business grew to become a pillar among the BE 100s for roughly 20 years and the first black-owned company publicly traded on the American Stock Exchange. Johnson was committed to the development of African American businesses. One such example was its sponsorship of Soul Train, a nationally syndicated dance television program created by a black former disc jockey Don Cornelius, It was the first nationally syndicated television program sponsored by a black company.

The Johnson sale also served as a catalyst for a succession of acquisitions of black haircare companies—a dominant segment of the BE 100s during the 1970s and 1980s—by general market health and beauty aids companies. In fact, the sale inspired the groundbreaking BE cover story that asked the question that still sparks contention to this day: “Should Black Businesses Be Sold To Whites?” It was not only haircare companies that produced outrage from some blacks. The buyouts of former BE 100s companies such as Motown Records by Boston Ventures and MCA Records in 1988; Black Entertainment Television (BET) by Viacom in 2000; Essence Communications, parent of Essence Magazine, by Time Warner in 2005; and most recently beauty products manufacturer Sundial Brands by Unilever were greeted by many blacks with responses ranging from disappointment to outright anger. Asserting that they were “selling up, not selling out,” the BE 100s CEOs countered with a range of arguments including that their firms were gaining resources needed to compete in rapidly-changing environments controlled by well-heeled, industrial behemoths as well as the ability to realize shareholder value, enriching themselves and other African Americans who owned stock in those entities.

The history of JPC demonstrated how a former market leader can significantly lose ground due to eroding market share as larger players like Revlon Inc. and Avon Products as well as nimbler black-owned competitors like Soft Sheen Products Inc., which rose to the Top 10 of the BE 100s due to the “Jheri Curl” trend, captured more and more of the estimated $1.5 billion segment in the 1980s. Moreover, the company took major hits to its stability and stock price due to internal challenges such as an underperforming manufacturing operation in Nigeria and heightened management turmoil and familial infighting.

Up On The Auction Block

After the JPC transaction, other black haircare companies were placed on the auction block. Due to industrywide consolidation and discovery of the lucrativeness of the black consumer market, multinational conglomerates began gobbling up BE 100s haircare companies one by one. In 1998, L’Oreal acquired Soft Sheen. IVAX sold Johnson Products to Carson Inc. that same year. In March 2000, Alberto-Culver, a $1.6 billion personal-care products giant, purchased Pro-Line., the third largest black manufacturer. L’Oreal agreed to buy Carson during that same year. By 2003, JPC found a new owner: personal care products giant Procter & Gamble.

The series of acquisitions ended decades of ethnic products owned, developed, and controlled by black companies. “The combination of L’Oreal’s massive marketing power plus the acquired brands of Soft Sheen and Carson will work to squeeze black manufacturers from the retail shelf,” says Alfred Washington, chairman of the American Health and Beauty Aids Institute (AHBAI) in Chicago, the group responsible for the Proud Lady logo on all black-owned haircare products.

Another turning point may have been some internal family conflicts. “Johnson Products, Soft Sheen, and Pro-Line were family corporations, as opposed to a company like Alberto-Culver or Revlon,” says Washington. “And in all three cases, it was family situations that led to their sale.”

In 2009, the company returned to black ownership when P&G sold it to RCJP Acquisition Inc., a partnership formed by husband-and-wife team Eric Brown and Renee Cottrell-Brown and private equity firms Rustic Canyon/Fontis Partners LP and St. Cloud Capital. The deal was valued at over $30 million. In May 2012, Dallas-based Johnson Products announced Eric Brown will leave as CEO and become executive chair as the company restructures and gets ready for future growth. Financier Gabrielle Greene was named his successor as CEO.

As for Joan and George Johnson, the couple reunited and became joint recipients of BLACK ENTERPRISE‘s highest entrepreneurial honor, the A.G. Gaston Lifetime Achievement Award, in 2002.